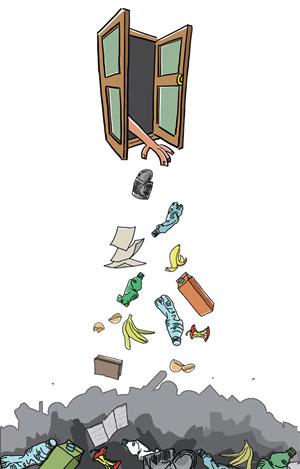 The traffic signal blinks red and a car stops. The driver rolls down the window and throws out a packet of chips. Although it seems like a usual phenomenon, where do the wrapper and other such waste products end up? Do we know?

In nature, thanks to a unique system called the food chain, nothing is wasted. But there is only a single species that creates waste— human beings.

Waste is a by-product of human civilisation. With every new stage of civilisation, our productivity increased rapidly. At the same time, we gained a new scale in waste generation as well. For instance, in the Stone Age, there was hardly any waste. Waste was still limited until we reached industrialisation. In the Industrial Revolution (1760-1840), production reached a new height, boosting the economy. Some economists say that the major impact of the Industrial Revolution was that the standard of living for the general population improved consistently for the first time in history. There was a demand for more products, both in quantity and quality. To meet these demands, industries created more and more products. Since the economy was booming, we ignored the cost at which we enjoyed the benefits, which ultimately led to a major leap in junk and garbage. Alas, even the economy did not grow continuously. It came crashing down in what is known as the Great Depression (1929-39).

Many thinkers proposed plans to get the economy back on track. One of them was Bernard London. In his paper called, Ending the Depression through Planned Obsolescence, 1932, he proposed that the only solution was to ensure that the goods produced had short lifespans so that people would need to keep buying. This would give an impetus to production and maintain economic growth.

This theory was called "planned obsolescence," which meant that products are designed with an artificially limited life. This idea was radically opposite to the norm of those times, which ensured that goods had long lifespans. For instance, a light bulb in a fire station in California, called the Centennial light bulb, has been working since 1901!

Initially, London's theory faced fierce opposition from different industries but gradually it was accepted and products were manufactured with a short life. Now people were purchasing more but not out of choice. This was because of the short lifespan of products. This led to the "speedy recovery" of the economy as London had predicted.

But one important factor was completely ignored. The combined effect of over-purchasing and shorter lifespans of products was that the world started generating waste like never before. Even today, we live by the same approach. Think of technology. We buy a new phone every few years, but we don’t think much about the various toxic wastes produced when it is discarded. Not just personal devices, even airplanes are discarded, literally.

A Tale of Two Mountains

We produce goods at a pace and volume unparalleled in the history of human civilisation. We have created a mountain of consumer goods but what we did not care about was who would bear its ill effects.

And what is done to the waste at the global level? It is simply dumped in villages and in weaker and poorer countries. We can see the mountain of garbage in the outskirts of cities. Rich countries have turned poor countries in Africa, Asia and Latin America into their junkyards.

Today a bulk of global e-waste is dumped in Agbogbloshie, a neighbourhood located in the city of Accra, Ghana, West Africa. It has become the world’s biggest electronic waste dumping site.

This toxic waste is slowly seeping into our water, soil, and air and if we don’t act to change the scenario, sooner or later, all of us will be equally affected, even if we are living in the mountain of consumer goods.