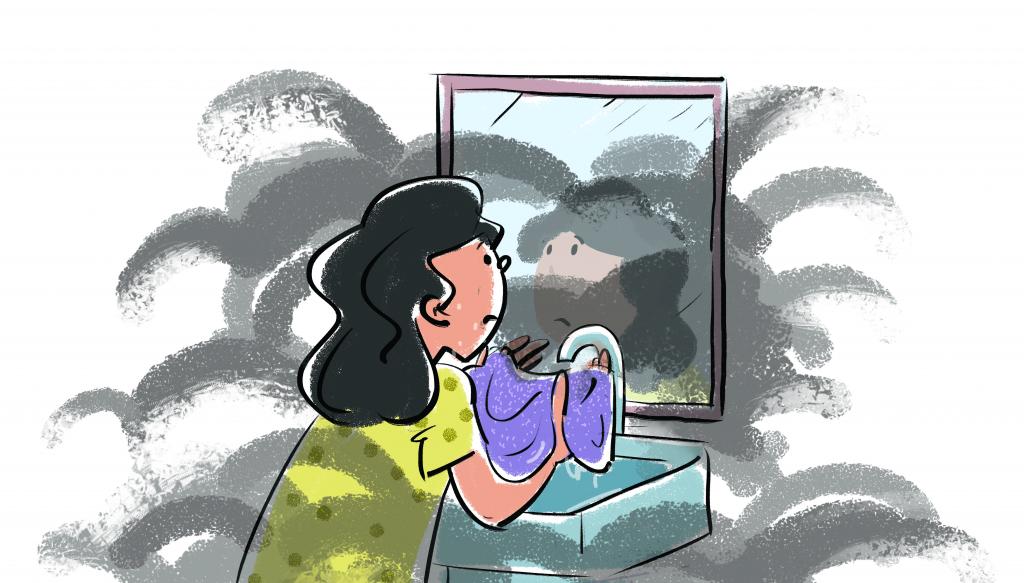 As the alarm went off, Divya hid under her pillow to steal a little more sleep before she gets ready for school. She had trouble sleeping throughout the night and kept coughing. She dragged herself out of the bed and splashed water in her eyes. Unable to see clearly, she stared hard at the mirror and splashed some more water only to realise there was a layer of haze around her. As she gazed out of the window, she couldn’t believe what she saw. Overnight, the city was covered by a thick blanket of smog. Nothing was visible—the trees, the gate, the signal at the crossroad—nothing. The coughing was back, and now her eyes were burning too. Divya walked to her mother who was watching the news on TV. While complaining of a terrible headache and eye burning, Divya's mother told her that the school has been shut down for the day. For a moment Divya smiled but soon she was back in her bed, coughing, and missing her friends. She had nothing to do. She couldn’t escape the pollution inside the house and going out to play was out of question.

Divya was not the only one whose day began this way. Citizens of Delhi and the National Capital Region (NCR) woke up to cough, wheeze and suffocation when deadly smog engulfed the region. The days had become dark, with very poor visibility, and within a day, the pollution levels spiralled out of control. The doctors in the city said it was a health emergency.

Air pollution in any case remains very high during the winter in Delhi-NCR but what turned it into an emergency. Scientists explain that it happened due to very calm and still weather conditions, with no wind to blow away the pollution. But in the upper atmosphere two air circulatory systems in the region—one from the west loaded with pollutants from stubble burning in the farms of Punjab and Haryana and the second from the east bearing moisture—trapped pollution at the ground-level, creating the deadly smog. In Delhi, the fog is mixed with toxic pollutants and dust that remain suspended and form shallow fog, turning Delhi into a gas chamber.

Every winter, in landlocked North India, weather turns hostile and traps pollution very close to the ground level, increasing our exposure to deadly pollution. Satellite images show dark and thickened mass of air across North India. Those living in cities of southern and western India have the advantage of coast and sea breeze to blow away the pollution, but it does not mean that the cities in these regions (like Mumbai or Chennai) have safe breathable air.

In fact, pollution levels recorded quite high then the normal in these cities as well!

Air pollution is a national crisis today. Nearly half of our cities have pollution level that is classified as critical, meaning the air is severely harmful for us. Not only that, smaller cities like Kanpur, Ludhiana and Allahabad are more polluted than the mega cities of Delhi and Mumbai. 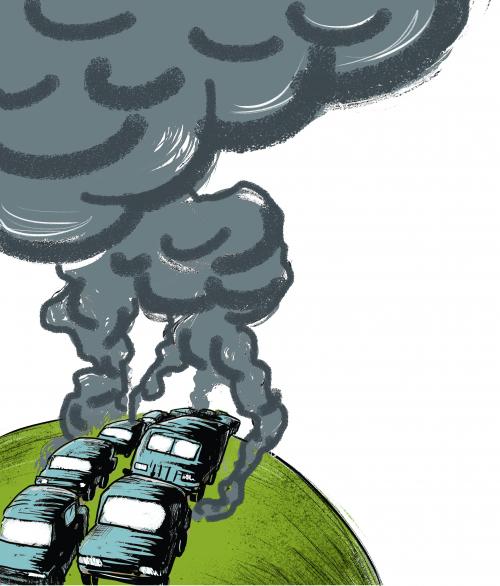 Thanks to air pollution, our cities are fast turning into gas chambers. According to experts, children are more vulnerable to air pollution because their lungs are smaller and are still growing. Compared to adults, they breathe more air, which means they inhale more pollutants.

During the infamous November smog in Delhi, the schools were shut and people were appealed not to step outside. They were also warned to not go for morning walks because the early morning air was more polluted.

To add to the turmoil, TV commercials were full of advertisements that claimed the air inside our rooms was more polluted than the air outside!

So practically we were left with no healthy space to live.

Where is the pollution coming from?

Anything we burn in our cities, garbage or burning fuels to run our cars, causes pollution. A variety of pollution sources emit a mix of gases like nitrogen oxide, ozone, carbon monoxide and very tiny particles as minute as one-fifth to one-fifteenth times the thickness of our hair. With such a small size, these tiny particles, along with toxic chemicals, can go very deep inside our lungs, break through our blood barrier and hit the organs.

Most of the tiniest particles and gases come from combustion sources like vehicles, cooking fumes, industry, power plants and waste burning. Besides this, another major cause of air pollution are dust particles that come from roads and construction activities.

What is being done?

Air pollution control is a difficult battle. And we need to change our lifestyle patterns to tackle the problem. For instance, reducing the use of private vehicles and encouraging public transport, checking burning of garbage in the open, to name a few.

The battle for clean air in Delhi goes far back. Over a decade ago, Delhi shifted its polluting industries out of the city, closed a couple of coal power plants, implemented a cng programme for public transport and tightened emissions standards for vehicles.

Though the air quality improved after this, it again deteriorated due to a slowdown in action. The deadly post- Diwali airocalypse that hit Delhi in 2016, drew attention of the Supreme Court, and led to public outcry that triggered the second phase of action under which the region got its first ever pollution emergency plan. It is called Graded Response Action Plan, or grap. As the pollution began to get worse in October this year, the emergency plan was kicked in. This included shutting down of coal-based power plants (like Badarpur coal power plant) and surveillance of other thermal power plants in ncr. Besides this, brick kilns, hot mix plants, stone crushers are closed; construction activities are stopped; trucks are not allowed inside Delhi, use of diesel generators is restricted and pollution from roads, construction and garbage burning being monitored.

Simultaneously, as a long term strategy, trucks not older than 10 years and destined for Delhi are allowed entry after payment of an Environment Compensation Charge.

It is too early to make claims about the impact of the emergency plan. But, three days after its implementation, the Indian Institute of Tropical Meteorology estimated that the plan contributed about 20 per cent of the reduction in pollution level since its build up on November 7, 2017.

But all these steps we have taken are emergency steps and it is not a good idea for any city to remain on emergency mode forever. Even emergency plan can have limited impact if sustainable solutions are not put in place. The good sign is that the Supreme Court has now asked and approved of a long-term and time-bound action to improve the air quality in a sustained way. This can also be taken to other cities of India.

Globally, governments are setting air quality targets to meet clean air standards and are drawing up action plans to meet the target in a time-bound manner. If the targets are not met, civil societies can sue governments in the court. China has already adopted this approach of setting targets and making city governments accountable.

The lesson we can learn from other global cities is to take tough actions to leap ahead and not waste time in small steps. For example, to control vehicular pollution, Beijing has capped the number of cars that can be sold, does not allow older cars to enter the city centre and has banned diesel cars. London has imposed congestion as well as emissions charges to make entry into central London prohibitive. Berlin, Stockholm, Amsterdam and Copenhagen, among others, have attained impressive scale of walking and cycling. Several countries have successfully prevented early deaths and illnesses and improved average life expectancy at birth just by improving the air quality. There is no reason why we cannot go that way.