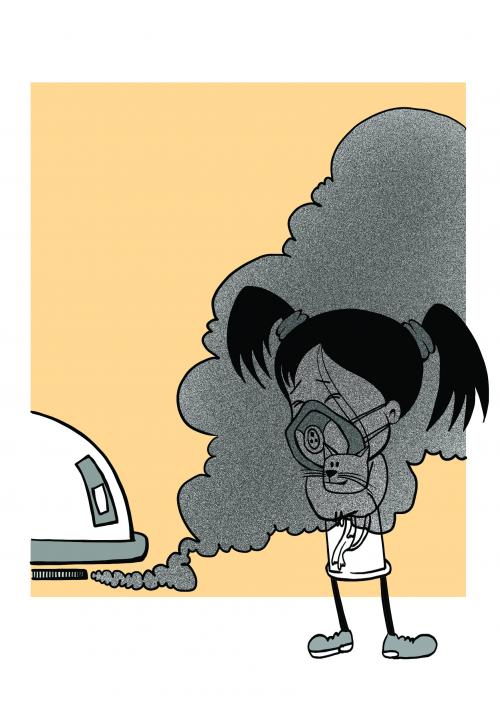 Suddu was anxious. He tightly grabbed Papa’s hand to avoid getting lost in the crowd. This was the third medical store they had visited since morning to buy a mask. The first two in their locality had already run out.

“Papa, when will we go home? I am hungry,” said a visibly irritable Suddu. More than hunger it was the urge to get out of the crowded medical store. “As soon as we buy the mask, beta,” his father assured him. “But why is there such a long queue?” he asked. “That is because many others want to buy the masks like us.”

Ever since Diwali last year, Suddu had been suffering from respiratory troubles, like many others. The incessant bursting of crackers had created a dense cover of smog which engulfed the capital. Many areas in the city recorded dangerous levels of air pollution. This gave rise to respiratory problems among the population and the demand for masks surged drastically.

After two hours, Suddu and his Papa finally managed to buy a mask. However, the real ordeal was to begin now. Suddu hated wearing that mask as it was disturbing. But he had no choice, especially when his parents were around. But when his father told him that they were going to their nani’s house the next day, where he won't have to wear the mask, he obliged his dad and stopped fiddling with the mask. It was just a matter of a day and then he would be relishing Varanasi’ delicacies, playing video games with his cousin, Ishu, reading comic books and most importantly he would not have to wear the mask. In the cab ride from the station to his nani’s place, Suddu slept. When he woke up, he felt strange. Why doesn’t it feel like Varanasi? Like nani’s home, he wondered.

And then he overheard his mama. “The doctor has advised that Ishu should also wear a mask. Varanasi is now becoming one of the most polluted cities in Uttar Pradesh.” Suddu's mother had noticed five cement mixers on the road. Mama told her that apart from the construction dust, waste burning, vehicular pollution, and crackers also ruin the air quality. When they reached home, the warmth of nani’s hug made him forget everything. While the elders were busy exchanging pleasantries, Ishu and Suddu planned to race till a temple nearby the next morning. Half way through the race, Suddu felt the same problem while breathing that he felt back home. He could not finish the race and halted midway. They both had to return home.

“Ishu, why were you not wearing your mask?” Mama seemed angry. Suddu realised that he had not brought his mask with him. Mama had seen him panting but he reassured himself as his father had not asked him to wear the mask in Varanasi.

When he reached home, he decided to walk silently past his father, in order to avoid a reprimand. But to Suddu’s surprise, his father just gently patted his head and said, “I am sorry, beta. I know you are experiencing the same respiratory problems that you had back home in Delhi. I know I told you otherwise but I request you to wear the mask here as well.”

Suddu could see the helplessness in his father’s eyes. He simply nodded. A few hours later the father-son duo found themselves standing at a medical store, waiting in a queue to buy another mask.

The city might be smaller, the store different, but the suffering was the same.