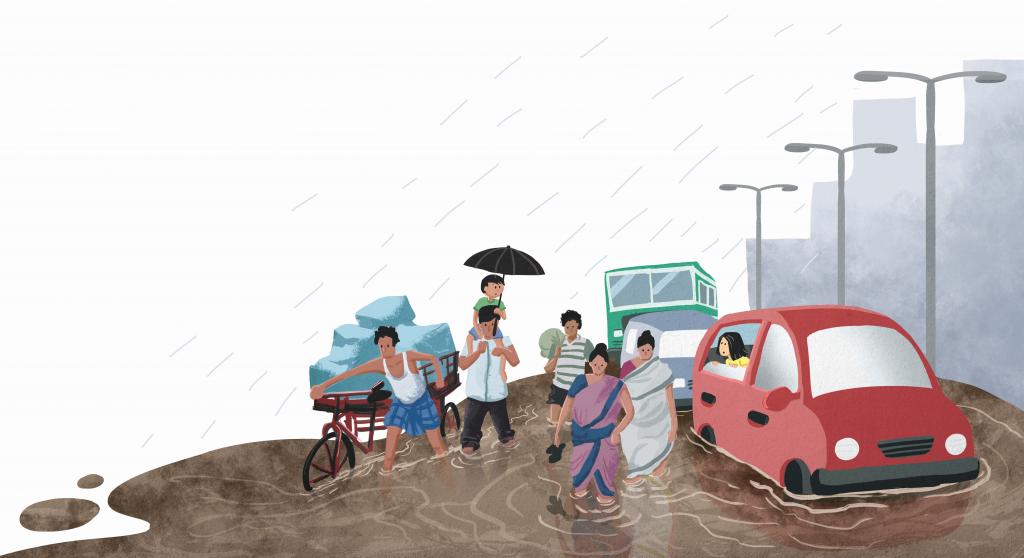 Archana and her father came out of the Chennai airport into what looked like a scene from an action movie. It was raining, but she could sense when the plane touched down. Now, at the airport, the cars stood honking one behind the other. Sridhar uncle was waiting in the car. They all got in and joined the long queue of cars waiting to enter the dark brown stream that formed the road out of the airport.

Archana's eyes grew wider and wider as they travelled down the road; the water was easily up to ankle level now and it was raining quite heavily. “What is this, Sridhar?” asked Appa. “Do you think we will make it to Mylapore?”

“Perhaps we should pray,” quipped Appa.

The water level kept rising. Archana saw people walking knee-deep in water. When they turned into a side road, they could see people huddled up under ledges, afraid, because the water looked like it might go above their heads.

“Why is this happening, Appa?” asked Archana.

“Not just that,” said Sridhar uncle. “We’ve done our fair share, too. See, Archana. Chennai has three rivers passing through it to carry extra water out to the sea.”

“I don’t understand, Sridhar uncle. The river can only carry the rain that falls on it, right?”

“Not really. Rivers often are connected to lakes or ponds by small streams. The more ponds you have the better actually, so you can save more of the rain when it falls and use it when you need. Gates often block the entrance from the lakes or ponds to the streams or rivers. Public officials watch the water levels in these lakes quite carefully, so when it rises above a particular level, they raise the gates and let the water flow into the stream and river into the sea. When it doesn’t rain too much, the levels don’t rise too high and the water in the ponds is saved. It acts as a water bank balance in our dry and hot summer months.”

“I can see the “but” coming a mile away,” smirked Appa.

“But…,” smiled Sridhar Uncle, “We have built apartments and offices over most of our ponds and dumped garbage into all our rivers. So when it doesn’t rain, we suffer from water shortage in the summer because we haven’t stored enough of our rain. When it does rain, we don’t have enough storage space and carrying capacity in the rivers so it flows on the roads rather than into the sea.”

Archana was really scared now. The water had risen above the tyres and the car was moving and floating forward slowly.

“Ha, ha. Look at this Whatsapp message I got,” laughed Appa. “Dear Public, Please do not believe rumours that Crocodiles have escaped from the Crocodile Park. It is not true.”

“Oh God, Appa,” cried Archana. “There were hundreds of crocodiles there. What if one escaped? What if the giant salty escaped? He was 16 feet long!” and she started to sob.

“Don’t scare her, Hari,” said Sridhar Uncle. “This is just a rumour. Moreover, Archana, even if one had escaped, the park is more than 30 km from here. The crocodiles have better things to do than swim 30 km just for us.”

“Yes, don’t worry Archana,” said Appa, adding his helpful mite. “I’m sure they’ll find something tasty on the way to distract them.”

“Anyway, with some luck, we should be home in 15 minutes. Do you know what global warming is?” asked Sridhar Uncle, quickly changing the subject.

“The world is getting hotter because of greenhouse gases trapping heat,” came the memorised reply.

“But do you know, that a hotter world is a stormier world?” asked Sridhar Uncle. “You see, Archana, as the air gets hotter, it can hold more water vapour, which means when it rains, it rains very heavily. There are reports saying that the rains we are getting now are heavier than rains we have received in 100 years.”

“Ten years ago, we had very heavy rains in Mumbai,” said Appa.

“This June, I was reading there were floods in Assam,” said Archana.

“That’s what scientists believe will happen. More intense storms, and in places like Chennai where we don’t have enough storage space or clean rivers, more flooding,” said Sridhar Uncle.

“Can we do something about it? Can we stop it?” asked Archana.

“Stopping it will mean us reducing the amount of greenhouse gases we emit into the sky. We would have to drive less, perhaps take a bus, consume sustainably and live more simply. Not just you and me, but all of us in the world. It’s not an easy task. But we can reduce the risk of flooding by cleaning out our lakes and ponds and not throwing garbage to block the drains or rivers.”

As the car pulled into the house, Archana saw her mother run out wading into the knee-deep water. She opened the door and ran into her mother’s arms. “We couldn’t reach you after a while. We were so nervous,” said Amma.

“We had an exciting drive, Amma,” said Archana. “And an educational one too,” smiled Appa.

Mridula Ramesh is the Executive Director of Sundaram Textiles. She is also a teacher and student of climate change.