The Matkas of Tikli! 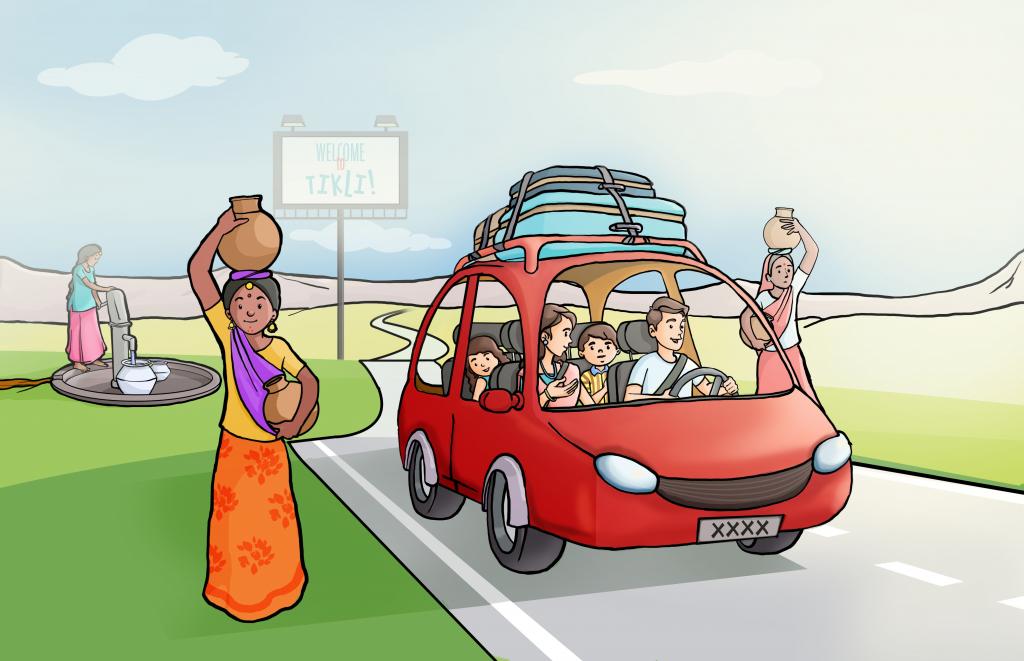 Chintu and Chinki were excited to go out for their summer vacations. They were bored of staying at home all through the lockdown. Since their grandparents lived nearby, they had planned to visit their village Tikli. Chintu and Chinki had done all their packing and rode off with their Mom and Dad to the village. As they came close to Tikli, they saw some women carrying pots of water on their heads, walking on the roadside.

Chinki curiously asked her mother, “What is this round thing on her head, Ma?”

“This is a matka. People in the village, many times, don’t get tap water in their houses. So, they go to handpumps, wells, or far off lakes to fetch water for daily use. To carry this water, they use matkas. Now, got it?” spoke Chinki’s mother. This popped-up a lot of questions in Chinki’s little mind. At first, she thought about the water tap in her bathroom. She wondered, “How do we get water in our homes, Ma?”

Her Mom answered simply, “All our water comes from lakes and rivers. Water pipes bring this water to water treatment plants. Here, it is filtered and cleaned. From there, again the pipes supply it to our homes. At homes, we have the water tap, which ultimately pour out the water when we need it. And since we have the tap water supply in our homes, we are lucky!”

“Hmm…” thought Chintu to himself. Now, he asked, “So, why do the village people don’t have water coming from their taps and pipes just as we do?” His Father took this question and replied that there are a lot of reasons for this. Most of the times, it is the government’s fault which is not able to send water to all the villages, near and far. But many times, the village people are also very poor and not able to get tap water connections. That is why they do not have piped water supply in their homes.

Chintu and Chinki were now into deep thought. Their father could see their puzzled faces in his back view mirror. Just then, Chintu popped up a query, “So… these women are carrying the matka because they don’t have enough water in their homes? Is that why they are going outside and carrying water?”

“That’s exactly what I meant, Chintu! The villagers face a lot of water shortage,” told Chintu’s Dad. “Ma… What if we run out of water and we have to fetch water in pots too?” asked Chinki nervously.

Chintu chuckled at the thought of little Chinki carrying a huge matka on her head. He teased her saying that he’d love to pinch and imbalance her whenever she tries carrying a matka! Though Chinki got a little pissed, their Mother and Father had a hearty laughter.

As Chinki pushed Chintu on the back seat, their Mom immediately assured her that Chinki will not have to carry matkas if she saves water. Then, we will have more water for our village people too. They will not have to take so much trouble every day.

That was when Chinki felt that she should do at least something to save water. She promised to herself that she will now turn off the tap while brushing her teeth. She will use bucket for bathing even though she loves shower. Also, she would not spill water here and there unnecessarily.

Phew! So, now Chinki was at peace and looked forward to playing with the matkas in Tikli!