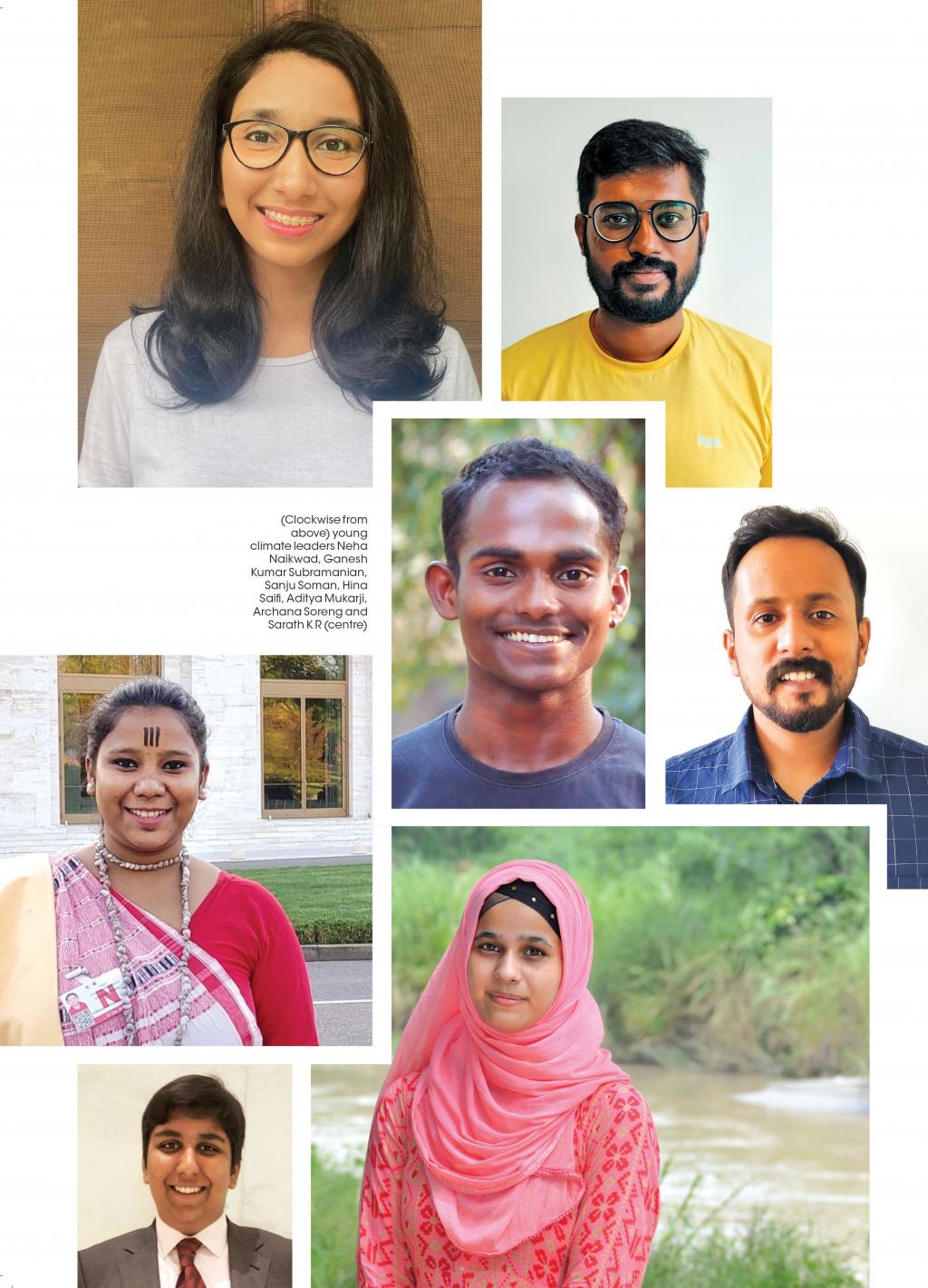 Held as usual a few days before COP (October 28-31 last year), this youth conference is the biggest so far, with thousands of participants having registered from over 140 countries. This is leaps and bounds ahead of the few hundred participants that would attend the conference a decade ago. The sixth edition of the conference, for instance, held in Cancun, Mexico in 2010, saw just 500-odd attendees.

The main agenda of the youth conference this year, as per Heeta Lakhani, an elected Global Focal Point of the Youth Climate Movement or youngo, a constituency of UNFCCC, was to share the views of young global leaders through a position paper that will be presented at the end of COP26. “Hopefully we can help countries build a consensus on how to move forward with the Paris Agreement, which they’ve been struggling with right now,” she tells Down To Earth (DTE)...

Such an expression of youth mobilisation was nowhere on the horizon three years ago, when then 15-year-old Greta Thunberg from Stockholm, Sweden, began skipping school to protest climate change inaction outside the Swedish parliament. Now, she serves as inspiration to millions of young people across the world to take to the streets to demand climate action from leaders. In September 2021, the UN recognised 17 such young climate leaders in India through its "We The Change" campaign. These leaders bring a plethora of ideas and ideals to deal with the global crisis. DTE reached out to 10 of them to understand what made them aware of the climate crisis and what can be done to involve more youngsters in the movement.

Most young climate activists say they fear losing the world they have grown up in. One such example is Archana Soreng, a research officer from Odisha’s Sundargarh district and a member of the UN Secretary-General’s Youth Climate Advisory Board. Belonging to the Khadia tribe of Odisha, 25-year-old Soreng is aware of the strong bond between indigenous people and nature. “My grandfather, known for community-led protection practices, believed in establishing a relationship with the environment. My father, an indigenous healthcare practitioner, gave me insights on transference of traditional knowledge from one generation to the next,” she says. “After I began to pursue higher studies, I realised that everything taught about environment in books—sustainable livelihoods, organic farming—are concepts I’ve seen in action growing up,” she adds. “It also made me see how communities often contribute the most towards climate action and yet are not involved in decision-making. This led me to research advocacy to protect the rights of communities like mine,” she adds.

Similarly, for Sanju Soman of Thiruvananthapuram and Sarath K R of Arangottukara village in Kerala, climate action was a way to preserve the land their communities call home. Having established Save A Rupee, Spread A Smile, a non-profit for social and environmental development while in college, Soman was inspired to take up the cause of wetlands destruction in his home state after a stint in Ladakh with another non-profit. “An initiative to provide solar power to households there was a turning point for me. I built enough social capital to want to start something of my own and returned to Kerala, where I began working on the Vembanad wetland conservation,” he says. “Communities here are the most vulnerable in the state, due to a recent surge in cyclonic storms and flooding in the last three years,” he says.

For 21-year-old Sarath, on the other hand, conservation of the Bharathapuzha river near his village was a matter of protecting his heritage. Years of ecological destruction had turned the river into a mere stream, much to the detriment of nearby communities that depended on the waters for irrigation and sand to make puppets. As member of Vayali Folklore Group, which works to preserve local culture and heritage, Sarath has started AlterSchool to promote collective action from governments and civil society to not just protect the local environment but also the legacy of the communities surrounding it, he says.

There are also those youngsters who are worried about an uncertain future if climate change continues unchecked. Eighteen-year-old Aditya Mukarji of Gurugram, Haryana, says he became aware of this possibility in 2018 when he saw a video of a veterinarian removing a plastic straw from a turtle’s nose. "It shook me. I began researching on plastic waste, and saw what an alarming situation the world is in.” He began a drive to eliminate plastic straws from hotels and restaurants in the National Capital Region and says that he has so far removed some 26 million straws from the ecosystem.

Then there is 19-year-old Hina Saifi from Sisosla village in Meerut district of Uttar Pradesh. “I gained climate awareness in class 8, when my teachers taught me about air pollution in my village due to crop burning and fossil fuel-based power,” she says. Along with other youths, and En Bloc, a Meerut-based social welfare organisation, she began to campaign for clean air practices in the district and demanded that authorities facilitate solar power. “The emissions and climate change are our own doing, and it is our responsibility to act on it,” she says.

"Youth today is also more aware of climate change because the impacts are more visible now, as opposed to, say, 30 years ago," says 28-year-old Ganesh Kumar Subramanian, co-founder of Kabadiwalla Connect. The Chennai-based company offers smart waste management solutions, such as safe handling and better segregation of waste, to the informal sector.

While it may be a sense of fear that drives young people to act against the climate crisis, easier access to information compared to the previous generations is what equips them with the right tools. With Internet and social media, there is now a greater understanding of planet's climate perils and the ways to mitigate their impacts. However, building the bridge between scientific knowledge and implementing ground-level initiatives is not so easy.

Assam-based Siddhartha Sharma, the 27-year-old founding curator of the Guwahati Hub of Global Shapers Community, a "network of young people driving dialogue, action and change" in over 140 countries, tells DTE why this gap must be closed. “In India, especially the Northeast, there is a need for a behavioural shift among the people to mitigate impacts of climate change. We rehabilitate people here who face severe effects of the climate crisis, such as mass displacement due to floods, but they do not always take the right remedial steps,” he says.

Sneha Shahi, 23, a PhD student of conservation science and sustainability at Ashoka Trust for Research in Ecology and Environment (ATREE), Bengaluru, also noticed a lack of practicality in her approach. “In the initial years of my studies I undertook only research projects, rather than take social action. Ideally, there should be a balance between the scientific data that we collect and the way we disseminate it to people, because not everyone will easily perceive what a scientist is trying to say,” she says. One instance where she did strike this balance was during her graduate degree programme and MS University, Vadodara, Gujarat. With the help of other students, she was able to revive a rivulet, leading to a return of some native species.

For Lakhani, who currently works as a climate educator, the disparity came forth when she attended COP21 to the United Nations Framework Convention on Climate Change (UNFCCC) in 2015 in Paris, France. “Despite a graduate degree in environmental studies [she was, however, working as a translator], I struggled to understand the negotiations. Even today, there are many who have no idea of how these international processes work or how the Paris agreement affects their lives. This was my motivation to get into climate education,” says 28-year-old Lakhani.

FOCUS ON NEXT TWO YEARS

Given the urgency of the climate crisis, what should be the world's strategy? The youth's suggestion—inclusive approach and short-term targets. “Countries have been dreaming of meeting Sustainable Development Goals by 2030. But what about the next two years? We cannot expect to just begin working on emission reduction in 2025 and be done in five years; we need to start working now. This is where the youth need a voice; they need a bigger seat at the negotiating table because they will have to deal with the consequences,” says Shahi.

Mukarji agrees. “We do not want promises for 30-40 years. We want progressive change now along with actual dedication from our leaders. The transformation need not be 100 per cent; countries must commit to targets they can meet for inclusive development.” This also pertains to inclusion of vulnerable indigenous communities, say Soreng and Sarath.

Is the perceived success of this Conference of Youth, then a sign for a brighter, more inclusive future? It remains to be seen.