A ‘Vigyan Mela’ or science fair was held at the Government Girls’ Senior Secondary School, Bilaspur, Himachal Pradesh. With a special focus on renewable energy, the four-day-long event saw students from 36 schools sharing their ideas with the world. Participants were divided in teams and each team had four members. The teams came up with innovative solutions to shape the future of energy. Here are a few ideas that can help achieve promising results with regard to energy consumption:

What would an eco-friendly house look like? The team from Government High School, Kanah, Solan prepared a model house as an answer to this very question! This model house would rely on solar energy for domestic electric consumption. The model also had a patch of deciduous plants. These would block direct sunlight during summers while doing the opposite in winters, when the trees would shed leaves. This was the house’s natural air-conditioner, said the students. Apart from these, the model house had rain water harvesting units and a composting unit.

The team had also focused on waste management. Their second project presented an economic solution to the problem of plastic waste. The group proposed the collection of single-use plastic items like wrappers, bottles and bags. These could then be sold at a price of Rs 75/kg to the Panchayat, the village authority. This would help reduce the pile of plastic waste, otherwise dumped in landfills.

Rising incidents of forest fire in Himachal Pradesh, India led to largescale loss of property and life in 2019. It was no surprise that students of St Edward’s School from the state capital of Shimla dedicated their project to finding a solution to this problem. The team’s project proposed a solarpowered fire alarm system to minimise damage due to forest fire. Sensors, running on solar power, would be installed at various locations in the forest. When conditions of a forest fire develop, these sensors would immediately alert the forest officials, who would then take precautionary steps to avoid the spread of fire.

This team prepared briquettes using pine needles, stubble and apple sticks. The process involved collecting waste products from fields, forests, and apple orchards; and subsequently crushing them into fine particles. The crushed material was then mixed with clay soil or paper mâché (binding agent), cattle dung and water. After this, the briquettes were kept for drying.

Students had also designed a solar-powered stove for briquettes. A fan was used to blow hot air while the stove used solar energy to generate heat. The model presents a practical solution to the problem of air pollution while using renewable energy. 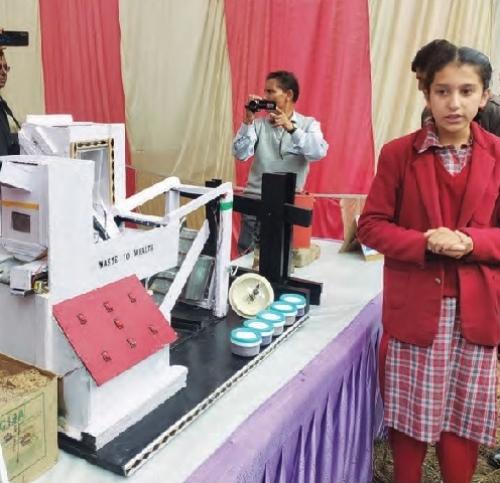 A student of Government High School Patgehar, Shimla, Himachal Pradesh exhibits the model of solar brick kiln developed by her team at the science fair in Bilaspur

From solar brick kiln to a city being run entirely on solar energy, the fair was brimming with practical solutions for the future. Each idea had the potential of changing our existing pattern of energy consumption that is heavily dependent on fossil fuels, known to be responsible for high carbon dioxide emissions. Can a small idea shared at a science fair lead to a big invention? Well, only time will tell and if it does, you will definitely read the story here.

WHO ORGANISED THE FAIR?

Centre for Science and Environment (cse) collaborated with the Himachal Pradesh Council for Science, Technology and Environment (himcoste) to organise the science fair. The event was part of an initiative called “Solar in schools” led by cse's Green School Programme (GSP) along with HIMCOSTE.