Once upon a time humans depended on the labour of animals and other humans to meet their daily energy requirements. From transport to agriculture, humans made use of natural resources like wind, water and gravity for their energy needs. Then came the fossil fuels. The discovery of coal, petroleum and natural gas marked the beginning of a new era in the 1700s, known as the Industrial era, when new energy sources paved the way for setting up the energy-intensive factories that shape our economy today.

Benjamin Franklin’s discovery of electricity in 1752 was followed by a series of related inventions by scientists like Alessandro Volta, Michael Faraday and Thomas Alva Edison in the 19th century. These, together, helped the human civilisation lay the foundation of modern urban cities, where electricity is a key component. The entities capable of fulfilling the needs of this energy-intensive society were the fossil fuel-dependent power plants, currently the world’s primary source for electricity. But they have one side effect. They release large amount of carbon dioxide, a greenhouse gas (GHG) responsible for global warming.

The good news is that humans have taken note of the harmful effects of fossil fuel combustion and are making efforts to switch to renewable energy (RE) sources like the sun, wind and water. India, for example, has set an ambitious target of adding 175 gigawatts (GW ) of renewable energy by 2022 and schools can play a key role in meeting this target.

The “Solar On Schools” (SOS) initiative of the New Delhi based Centre for Science and Environment (CSE) identifies schools as key institutions of ground-level change. Besides helping young minds understand why a change in existing patterns of energy consumption is needed, they can serve as active grounds for solar initiatives in the country. 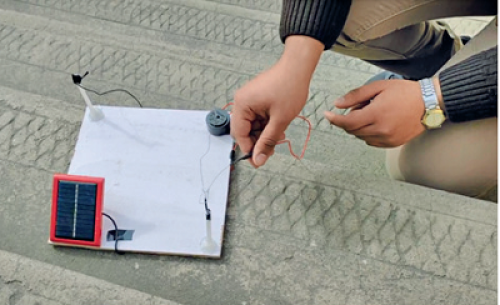 As part of the SOS initiative, CSE's GSP team conducted a series of activities and awareness programmes on solar energy for schools in Himachal Pradesh and New Delhi. Through workshops and exposure visits, teachers were sensitised towards the need to switch to renewable energy. A science fair was also organised to help students understand the basics of solar energy through activity-based learning.

The GSP Energy Audit 2019 helped more than 1,800 schools assess their energy consumption patterns. Nearly 12 per cent of schools used solar energy, while only one per cent claimed to use biogas. Of the schools that had solar installations, 75 per cent did not avail subsidies under the various schemes launched by the Union and state governments.

What we learnt from SOS

At the end of a year-long marathon of solar energy focused activities, the GSP team conducted a roundtable conference with government officials and its private partners in New Delhi’s India Habitat Centre on February 13, 2020. Here are a few major observations from the SOS initiative:

A lot more can be done

The conference also helped in identifying some of the existing gaps in information related to renewable energy. There is an urgent need to develop an information portal on renewable energy, suggested experts. Schools can access this section for information on solar installation. For teachers, the section can act as an online information centre, which they can rely on to complement their teachings on re in the classroom.

Solar Energy Corporation of India (SECI) is the nodal agency responsible for the implementation of several schemes of the Ministry of New and Renewable Energy Sources (MNRE). SECI's grid-connected solar rooftop scheme for 97.5 mw installations can also come handy for government schools looking to set up a solar unit.