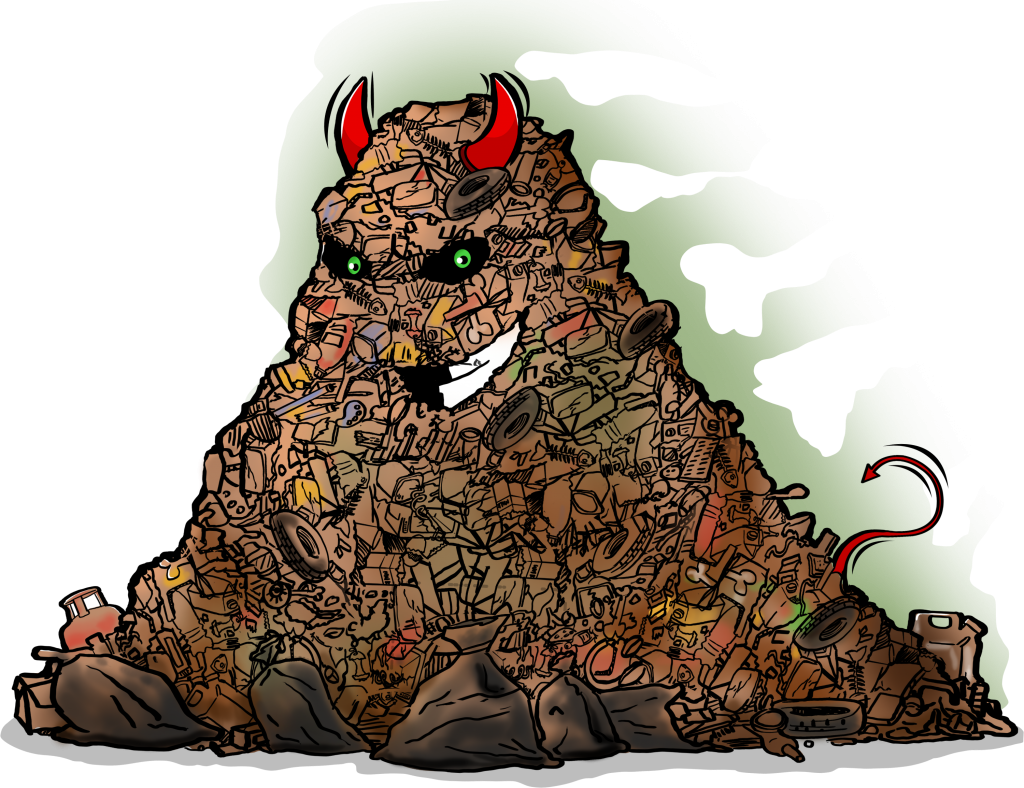 A huge dark mountain is looming up amidst houses and buildings, with a flock of crows and eagles circling over it. As one goes closer, you can see people on it, scouring for things they can re-sell, while scrawny-looking dogs fight to find something to eat. Trucks carrying loads of trash trudge up the mountain. And quite often, you find a fire raging on one side of the mountain, slowly enveloping the nearby areas in thick, fetid smoke. The whole area stinks to high heavens, of course. 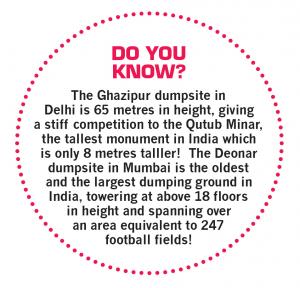 You know it. This is your friendly neighbourhood landfill, or dumpsite, as some would call it. You have often seen it as you go across the city or town, wondering how people manage to live in houses so close to it. In fact, you can smell it much before you catch sight of it. But have you ever stopped to think about it at some length?

These eerie mountain ranges of waste and trash are synonymous with urban India today. You will find them in almost every city and town – standing testimony to our lifestyles. We generate huge amounts of waste on a daily basis and most of this waste is not segregated, recycled, or reused: it ends up in these landfills every day, adding to their already huge volumes.

We Indians are the world leaders in generating waste – we reportedly produce over 60 million tonne of solid waste every year! On an average, we generate three and half times our weight as waste annually! How do we get rid of all this waste? Many would promptly dump it in landfills. But is that even a solution? NO! Let us understand why.

WHY IS THE PILE A MENACE? 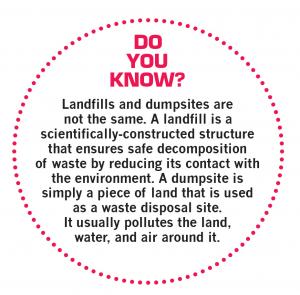 Open dumpsites are a major environmental menace, as they contaminate the land and water around them. They give rise to the formation of toxic leachates (polluted liquids). These are created as a result of rainwater seeping through the waste, taking all soluble substances with it, and due to the decomposition of organic waste, mostly food. These leachates settle at the bottom of a dumpsite and seep through into the ground. They pollute the land, surface waterbodies—nearby rivers, ponds, lakes—and the groundwater aquifers in the vicinity. Dumpsites and landfills also contribute to air pollution: fires in landfills are a common sight during summers and the fumes that result are quite toxic. Besides the fire hazards, these sites also increase the PM (Particulate Matter) levels and release carcinogenic gases (causing cancer) due to uncontrolled decomposition.

A Contributor to the Climate Crisis

What do our dumpsites have to do with the worsening climate change? Well, a lot! Organic waste lying in the open decomposes to form two very dangerous greenhouse gases: carbon dioxide (CO2) and methane (CH4). Methane is 84 times more potent than CO2 in absorbing the sun’s heat, and is therefore, a key reason behind the warming of our Earth! Often, it is CH4 that triggers landfill fires. If CH4 comes in contact with an ignitable source (something that can catch fire easily), it can quickly catch fire and emit noxious gases. Soaring temperatures and heatwaves during summers are another cause of fires and resultant emissions from landfills.

Contaminants from a dumpsite can pollute the local water and land resources, and lead to multiple health problems among residents. Humidity and heat encourage faster bacteria growth, which adds to the odour and invites pests and vectors, like flies and mosquitoes. These can trigger disease outbreaks.

Quite apart from all this, many cities are struggling to find space for dumping their waste and have chosen to throw it outside their boundaries. This has led to conflicts with the poor locals living in those areas.

WHAT KIND OF WASTE DOES A DUMPSITE CONTAIN?

Waste from commercial establishments includes plastic, cardboard, etc. Indian dumpsites contain a mix of fresh and legacy (old) waste. Take a look at the composition of the two types of waste at an average dumpsite.

WHAT IS BEING DONE TO MANAGE DUMPSITE WASTE BETTER?

Based on the composition of waste, there are two processes that can manage the mountains of waste. 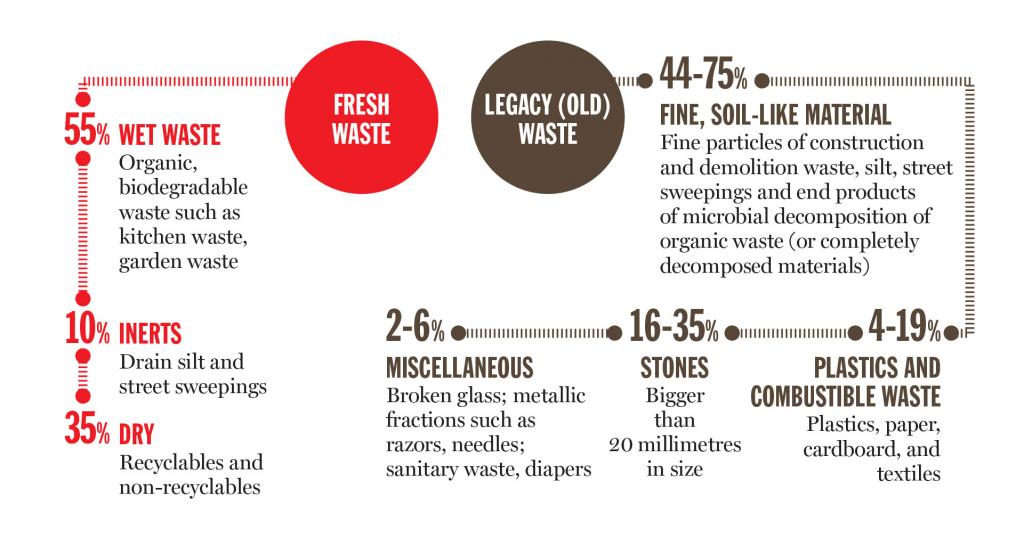 This involves placing a cover of a barrier layer—high strength and high-density plastic, soil, and vegetation—over the waste. The release of methane and other toxic gases is managed through vent pipes that allow the gases to come out of the waste so that they can be treated appropriately, avoiding emissions from going into the environment. This technique does not address the root cause of the problem but ensures that the waste is kept in place to avoid contamination. It is usually performed at dumpsites with a huge quantum of waste. 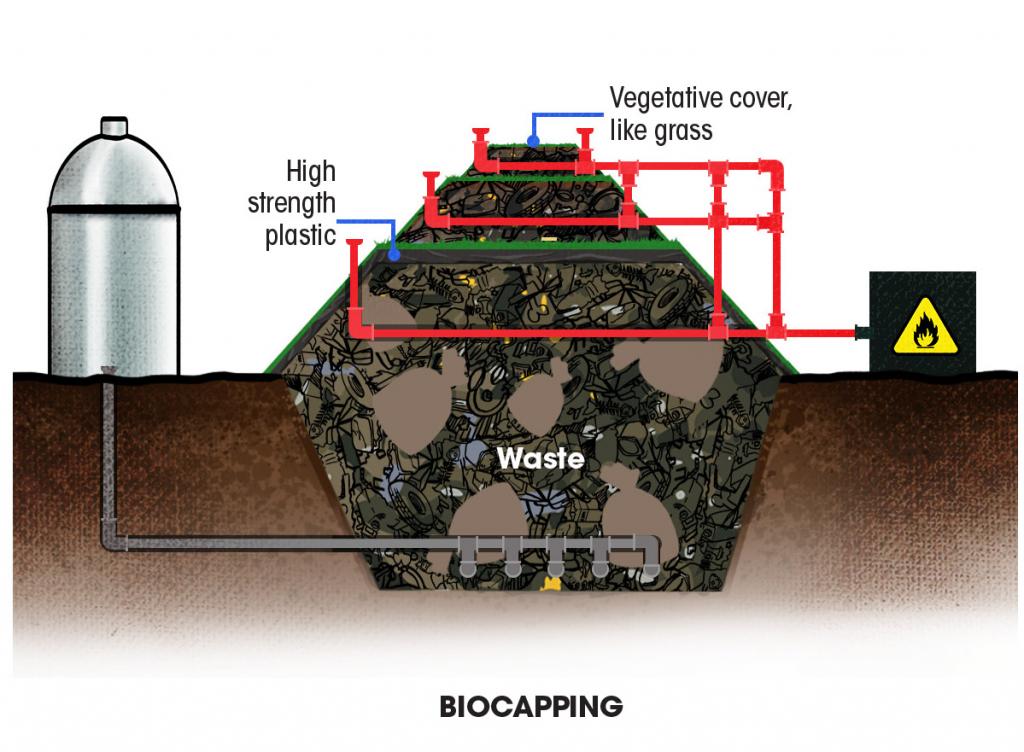 In this process, the waste is excavated from the dumpsite and treated with the help of bacteria. These bacteria ensure that the organic waste is decomposed and converted into a chemically stable material. This process is known as bioremediation. The treated waste is then sorted in trommel machines where valuable recyclable materials are separated. The end produce, mostly soil-like material, is utilized for filling up some low-lying areas. The combustible materials are sent to cement plants where they are used as a fuel.

In theory, biomining is preferred over biocapping as it reclaims the land that can be used for alternative purposes; but in practice, both the processes have their limitations. Landfills are simply not a solution.

Out of sight, out of mind’ is the biggest problem with the way household waste is managed. It is far too convenient to put everything we want to discard in plastic bags, put them in the garbage truck, and forget all about it. So, what else can we do? The answer is simple: do not send your waste to landfills. And below are some tips following which you can get started. 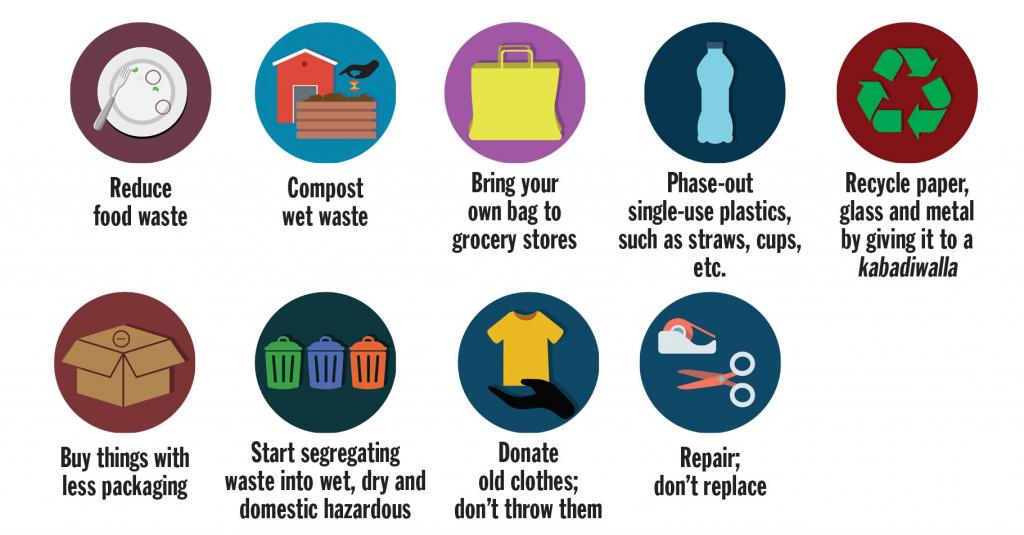