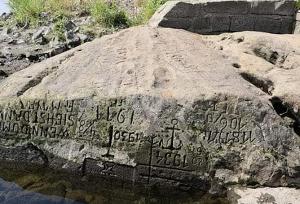 In summers this year, some European rivers had dried substantially, causing drought in many parts of the region. It revealed to their surface, some ancient stones with intricate engravings on them. Their markings used to indicate the water-level of these rivers, which served as a common forecasting tool for famines. Such stones were called hunger stones. One such is disclosed at the banks of the Elbe River. Dated to 1616 AD, its rock is etched with a warning in German: "Wenn du mich seehst, dann weine," meaning, ‘if you see me, then weep.’