Jhuru and Bagha Go for a Ride 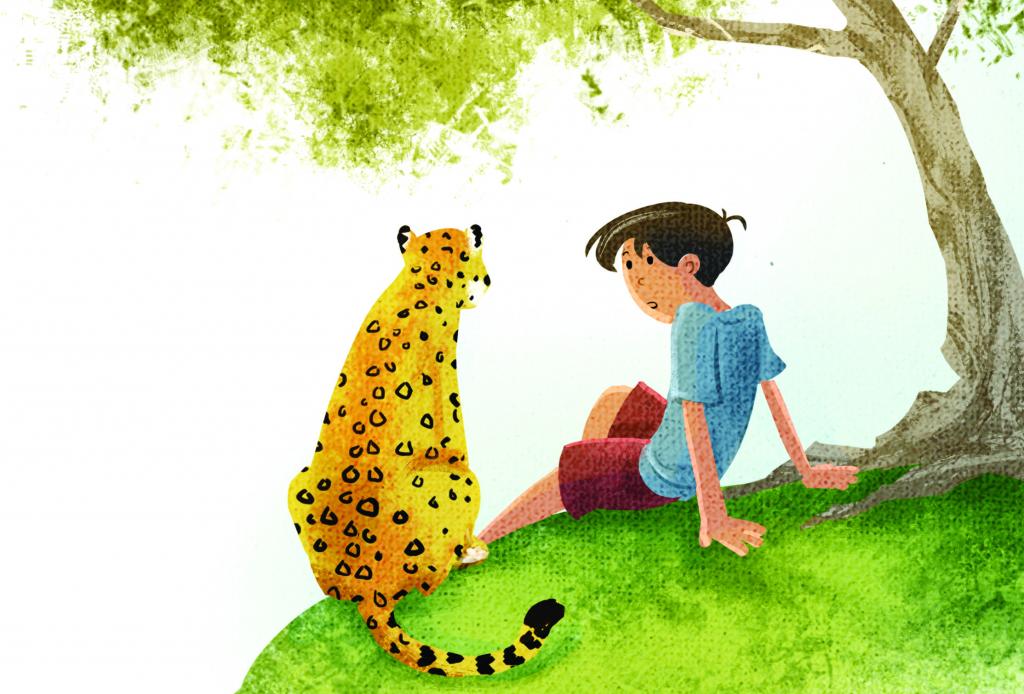 Jhuru is atop a hill with his friend Bagha the leopard sprawled next to him.

“Bagha, why do they always call me when I am with you?”

“Well, they don’t want us to be together,” says Bagha licking his paws.

“Or are they scared?” Jhuru asks. He gets up and shouts, “Amma, aataa” and proceeded to sprawl again next to Bagha.

Jhuru and Bagha hear a strange sound. They crane their necks to see where it comes from. Their village Barera is below, with neatly lined huts. Out of the village, a road meanders into the forest. At one bend, Jhuru can see people standing and looking into the distance.

What were they looking at?

Bagha looks at Jhuru and says, “You need to know mate, waz going on.”

The sun was in the western horizon, glowing orange. In the few hours Jhuru had been at school, a large number of trees had been cut. “The mahua is standing. But where’s the mango tree next to my home?” Jhuru wonders. “Arrey Amma, why did you let them cut my mango tree! It was where Bagha and I sat at night.”

“They said they were making a road beyond the forest for a bus to be able to take us to Haldipur. So I let them cut it,” Amma responded.

“Arrey wah, we will go to Haldipur by bus! I have seen a bus only on TV. Now I will ride in one! By when, Amma? By when will the road be made? Did they tell you?”

“No . . . ask Daju.” Daju is the granduncle of Barera. Everyone—young or old, man or woman—loved him. Children enjoyed playing football with him and the elders sought his advice. He seemed to know everything.

Daju is there, shouting angrily at some strangers. “Who told you to cut the mango tree? The road could have been built without cutting it. Mango, sehjan, neem, all gone! Do you know how many birds and insects lived in the trees? How they help bring bees to our fields? Do you know how many snakes live in the holes beneath? They help control the rat population. Now rats will run amok and devour our crops.”

“You rascals," Daju continued. “I told you not to cut these trees, to clear the kikar instead. That would have helped us, the kikar is a nuisance. But the kikars remain, while the rest is gone.” Jhuru listened in stunned silence. No one had ever heard Daju so angry. He wondered what the fuss was about. Trees were trees. Neem tasted so bitter. Good it’s gone. Now he won’t need to clean his teeth every morning. And sehjan . . . uff, how he hated its taste. But without the mango tree . . . where would Amma and her friends do karma puja, worship the mahua and other trees, light lamps and sing songs? Sidhva and Munia also wondered why Daju was so angry.

The bus has come to Barera. Daju calls all the children. “We are going to Haldipur today. No school. One day’s chutti won’t hurt,” he smiles. “Arre wah!" exclaims Sidhva. Munia goes running round in circles, shouting “Kya mazaaaaaa…” Jhuru runs up the hill. “Bagha, I am off for the day. See you in the evening.” “I will also go,” says Bagha. “You can’t! How will you board the bus?” Bagha is sad. He doesn’t say anything.

Jhuru runs down to join the gang. The bus moves.

Fasal the bus driver gets off the bus. “The city sounds have made me lose my hearing,” he says.

“Daju, we will all sit together,” shouts Munia, running to the back of the bus.

“The first stop, 15 minutes away, is Motinagar,” says Subhash, the bus conductor. As the bus moves, Munia asks Daju, “Why were you so angry the other day? Pedh hi toh kata. Kya hua? It will grow again.”

Daju looks at Munia sternly. “A tree is not just a tree. It sustains many creatures, including humans. The moringa or sehjan is very nutritious. So is neem. Every bit of these trees is used as food and medicine. The undergrowth of these trees sustains herbs, such as brahmi, dudhiya and many more. All these are medicines for us.”

“But the kikar has no medicinal use. It is not native to our land, but was introduced to green the land. It has overrun the place. Always plant local.”

“Haldipur . . . Haldipur,” shouts Subhash as the bus enters Motinagar bus stand. Fasal switches off the engine, and says, “Let’s go and have some tea, Daju.” Daju looks at the children and says, “You be here. The bus will stop for about ten minutes.” Munia starts jumping around.

Jhuru and Sidhva look out of the glass pane. It is early morning. People are boarding the bus. The boys see Subash climb the back of the bus to put some bags and vegetables on the roof. Suddenly they hear a frightened shriek.

“Arrey dayya . . . maar daala!” Subhash shouts as he scrambles down, jumping off the last steps.

“Arrey wahan toh . . .” shouts Subhash, before falling unconscious. Jhuru sees Daju at a distance, looking up. A crowd has gathered.

“Arrey . . . gaadi pe tendua. Let us kill it. Or it will kill us!” Hearing this, Jhuru runs down. Munia and Sidhva follow. A crowd has gathered around the bus. They are hitting the sides of the bus with sticks. Someone is yelling, “That tendua will eat us up. Kill it!” Jhuru climbs atop the bus and hugs Bagha.

“Don’t be afraid. No one will harm you,” he says. Munia and Sidhva also climb up. Daju is standing near the bus. He shouts, “Stop, stop! Can’t you see the children with the leopard! Has it eaten them? Do you think it will eat you? NOOO! Stop the noise, you crazy city people.”

In the chaos, someone has informed the local TV channel. A young man points a camera at the bus, while another shouts, “AAJ KI SAANSAANI KHABAR! Motinagar bus stop mein tendua.”

“This bus will not go ahead. It will go back to Barera.”

“Uff . . . these citywallahs! First they build roads to reach the forest. Then they kill or put the animals in cages. No more going to Haldipur,” Daju mutters in disgust.

Atop the bus sit Munia, Sidhva, Jhuru, and of course, Bagha! Bagha turns around to look at Jhuru, and says, “I was so frightened, mate! What if they’d killed and stuffed me, and put me on a wall? No more bus rides for me!”

A writer and storyteller