It was a normal day in the courtroom. The judge entered, took his seat and checked his gavel by thumping it on his desk before saying, 'Let the proceedings begin. Today the court will hear the case in-between Mr Bat and human beings. Mr Bat please come into the witness box and take the seat.'

The attorneys were then asked to start the proceedings.

The opening statement was made by the lawyer representing the humans. 'My lordship! Today is a very important day in the history of the world. All of us present in this courtroom are aware of the fact that the future of immunity is at stake because of the peculiar coronavirus and we have found out the real culprit responsible for its spread. It is none other than the ugly, weird and creepy creature known as the bat!' said the lawyer.

'I object, my lord!' shouted Mr Bat from the witness box. 'The prosecutor has no right to use derogatory and demeaning words against me. After all beauty is in the eyes of the beholder!'

'Objection sustained,' said the judge. 'Please don’t use such words in the courtroom,' warned the judge.

‘I am sorry, sir!’ said the prosecutor.

‘But I would like to point out a number of strange and unusual characteristics of the bats. These include a few characteristics that are uncommon in the animal kingdom. For example, bats are the only mammals that can fly. They live upside down and suck blood from other animals like mosquitoes! Vampires! Eek!’ said the prosecutor.

‘Mr Bat, do you want to say something in your defence?’ the judge said.

Mr Bat nodded and said, ‘My lordship! It was the night of March 24. I woke up to a different world when I came out of my cave along with thousands of other bats in search of food. I was surprised to see that wild animals were strutting the streets in the city. Humans were nowhere to be seen! Later we were asked to return back to our caves as humans were angry at us and wanted to kill us! We were surprised to hear this.’

‘As we were asked, we went back to our cave, where I found that a few officials were waiting for me. They had already arrested some bats and they arrested me too. An FIR was registered against us and we were accused of being the prime conspirators of a disease that has killed lakhs!’

‘So, do you wish to challenge these allegations in court?’ asked the judge.

‘Yes, but let me clarify and refute each allegation one by one,’ said Mr Bat.

‘The first allegation against us is that we, the bats, are ugly and creepy. For that I just have to say that we are beautiful in our own way and we don’t care what others think about us. There is a general perception among humans that bats are scary, strange and dangerous. However, of the over 1,200 bat species, only three are vampire bats. Of these three species, only one prefers the blood of mammals, and even these bats mostly feed on cattle,’ said Mr Bat.

After a brief pause, he went on, ‘Maybe this doesn't seem so great, my lordship, but vampire bats can be of great help to humans. A chemical known as desmoteplase, which is found in the saliva of the vampire bat, helps break down blood clots. It is also used for medicinal purposes, especially to treat patients who have suffered from a heart attack.’

There was pin drop silence in the courtroom.

‘Now, coming to the real importance of bats. My lordship! Bats are one of nature’s best pesticides. Almost 70 per cent of bat species feed on insects and help control the real vampires: mosquitoes, whose nasty bites are not just annoying but spread diseases, like the West Nile virus!’ Mr Bat said.

‘I object, my lord,’ said the prosecutor but the judge over-ruled his objection and asked Mr Bat to continue with his defence.

‘Thank you, my lord! As I was saying, a single little brown bat can eat around 1,000 insects every hour, and a colony of Mexican free-tailed bats can eat several tonnes of moths in just one night. Just calculate how much pesticide would be needed for the same? And please don’t forget to calculate the price we paid in the form of ecological destruction and soil pollution because of the use of harmful chemical pesticides,’ Mr Bat said.

‘Your lordship! We, the bats, are also master pollinators. Fruit bats, also called mega bats because of their large size, are important for their role in plant pollination. For example, the cave nectar bat is the only pollinator of the durian fruit in Southeast Asia. Other bats pollinate peaches, bananas and the agave plants. Without the cave nectar bats, many of our food plants would be unable to produce the tasty fruits you humans enjoy,’ said Mr Bat.

‘I am impressed!’ said the judge. 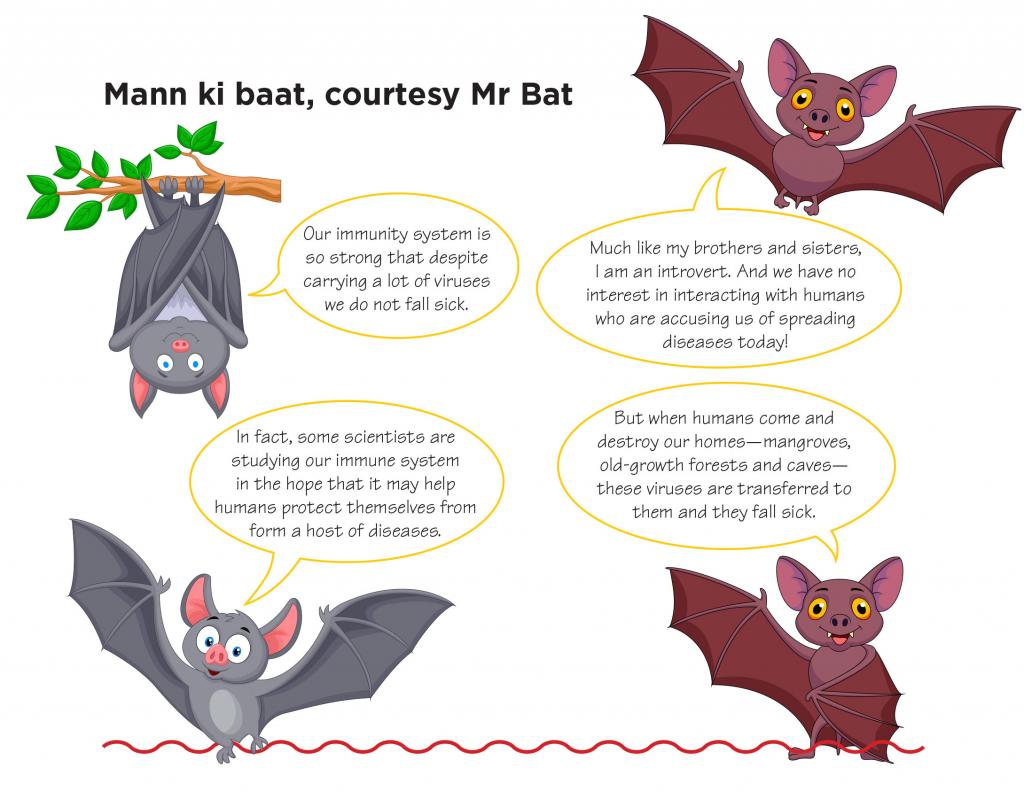 ‘Don’t try to fool the court by advertising yourself as pollinators and insect-eaters you creepy creatures!’ shouted the prosecutor. ‘Can you please inform the court about your virus-carrying ability Mr Bat?’ the prosecutor said aloud.

Mr Bat responded calmly and said, ‘Your lordship, many people worry about getting infected by bats. For example, take the rabies virus. It is true that bats can be carriers of this disease-causing virus but the same is true for many other animals like dogs, cats, raccoons, skunks and foxes. In reality, less than 0.5 per cent of all bats carry this virus. Now-a-days we are held responsible for nurturing and spreading the virus that caused the COVID-19 pandemic. But it’s the humans and not the bats who are the main culprits. In the name of development, humans keep destroying our natural habitats. Bats all over the world are threatened by the damage done to the mangrove swamps, old-growth forests and of course, bat caves—our homes!

There was no objection from the prosecutor this time.

Mr Bat continued to speak in his defence and said, ‘Next comes the human-induced climate change and habitat destruction. For example, a record heat wave in Australia caused over 1 lakh bats to die from heat exhaustion in January 2014. It is known that zoonotic diseases or diseases caused by direct contact with wild animals are triggered by the destruction of forests. So, my lordship, we, the bats, are the victims of human aggression and it us who need to be saved.’

The prosecutor remained silent. The judge considered the arguments of both the sides and replied, ‘This court is of the opinion that it is the humans who are the biggest threats to life on Earth. The court orders humans to act responsibly and avoid any conflict with nature in the name of economic growth.’