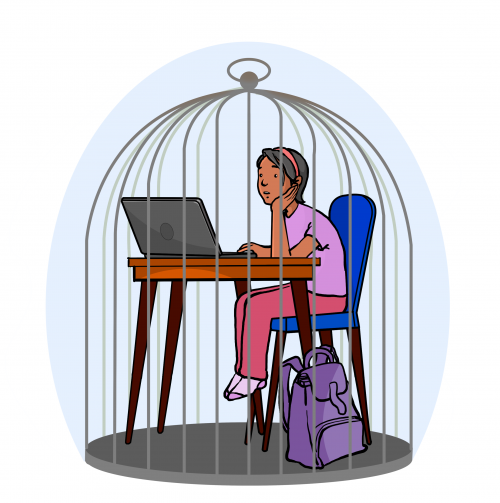 When a free bird is trapped in a cage, it writhes in pain and pines. My uncle had a parrot who used to roam around the house even though it had a cage to live in. That parrot is the representation of our lives before the pandemic. We used to live in our houses just the same but we had freedom too. However, during these two years, it feels as if our gates are shut with a huge lock called 'Covid-19’. The parrot that represents us is slowly suffocating now.

Living in Odisha, we usually had months of summer vacations, gifted to us by the cruel but thankful, heatwaves. However, in the last two years, none of the students were under risk as we were all already caged inside. Hence, the worst happened. Our vacations, our only time of solace and joy, were cut-short to a meagre 10 days!

‘Oh! What do you children do anyways that makes you need breaks?’, ‘Go and study!’ In fact… ‘There should be no breaks for students’ became the go-to line of every adult when we complained.

Those ten, seemingly short, days were further stiffening and torturous. Due to the lockdown, I couldn’t visit my extended family or travel around Odisha! Because of the short span of holidays, our teachers didn’t even hold any ‘warming’ sessions for us where we share our experiences.

The silver lining was that I got ample time to talk to my father and other family members at home.

As expected, my physical health dropped like a stone in the ocean. There is nothing wrong with being chubby but I began gaining weight in an unhealthy fashion. This triggered concerns about obesity. In addition, my sleep cycle also suffered as due to the lack of any exercise and physical exertion, I had trouble falling asleep on time. Hence, I was waking up late.

As for online classes, I feel like they are the bane of my existence! Not only are they boring, they are also less effective than traditional classes. They have cut out all social interaction, which might affect one’s confidence-level in a social gathering later.

As a compilation of my feelings: I miss the sense of normalcy, which I took for granted. I miss travelling, my extended family, and my friends. Although, I never imagined that I’d say this, but I miss school too. The feeling of missing someone or something is constantly looming over me now.

She is an 11-year-old student of class 6, Gaurisankar Residential English Medium School, Bhubaneshwar.