The Tortoise And The Hare

All of us have heard about the story of the tortoise and the hare. It goes something like this...

Once upon a time, there was a hare who was proud of his speed and would make fun of the tortoise for being slow. Tired of the constant jibes, the tortoise challenged the hare to a race. And the hare accepted the challenge gleefully.

On the appointed day, every animal in the jungle gathered to watch the race. Before the tortoise could take the first step, the hare had raced off and in no time, the furry creature had reached the halfway mark of the race.

It looked back but could see no sign of the tortoise. “This tortoise is never going to win against me,” he thought. The hare decided to take a short nap while the tortoise caught up with the race. "Even if the tortoise reached the halfway mark, I could always run past my bicycle-riding opponent," thought the hare. When the hare woke up and looked around, the tortoise was still nowhere to be seen. Confident of winning the race, the hare ambled towards the finish line only to see that the tortoise had already crossed it. 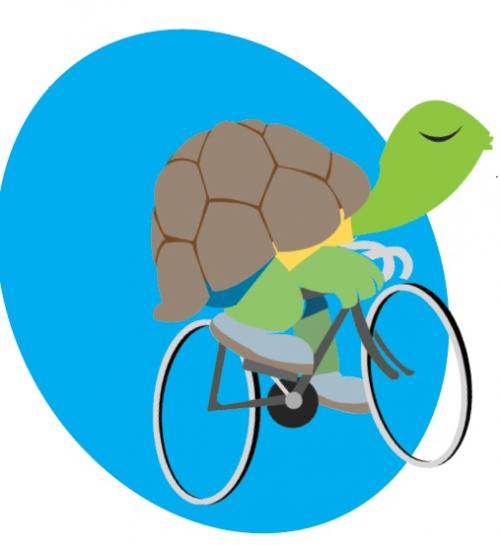 The hare had overslept and lost the race. Moral of the story: Pride hath a fall. Now, what if tell you that this version of the story is full of inaccuracies and problems. For example, why would the hare sleep during a race? That is the most idiotic thing one has ever heard of! And while humans might be capable of such stupidity, no animal can ever be this naïve.

So today, I am going to narrate another version of the story. And it goes like this...

The arrogant hare was, in fact, part of a biker gang. All of them had fancy motorbikes that guzzled oil like a whale swallows plankton. And our tortoise owned a bicycle, that was slow but it did not need fossil fuel to run.

Whenever they ran into one another, the hare and its friends would make fun of the tortoise. They would zoom past the tortoise riding his humble bicycle; drift their motorbikes around and then vroom past him again. Sometimes, they would hoot over the sound of their bikes. At other times, they would slow down and pass mean remarks “Hey, bicyclist! Need help lugging that thing around?” they would titter. Or they would say, “Cool ride. What’s its mileage?” This would almost make them roll off their bikes in laughter.

The tortoise would not say much in return. He was alone and they were many. Besides, they could outrun him easily and chase him down. So he would put his head down and keep pedalling.

Every once in a while, he would give a simple reply like, “My bike has infinite mileage. You will see.” At last tired of all the taunting, the tortoise challenged the hare to a race. The hare and its biker friends were amused.

“How can we compete against your flying rocket?” they sniggered.

But the lion, the head of the jungle, told them that they could not make fun of the tortoise unless they take part in the race and prove their worth to everybody. So the hare agreed to race against the tortoise.

On the fateful day, the hare was waiting, revving his expensive motorbike while the tortoise pedalled his way up to the starting position. A wolf howled, signalling the beginning of the race, and the hare sped past the tortoise even as it shifted its weight on the pedals of the bicycle. Soon the hare was out of the tortoise’s sight.

The hare kept zooming ahead like a comet across the sky. But suddenly, it's motorbike began to lose speed and it came to a standstill. It had run out of fuel!

The hare blamed itself for not checking the fuel tank of the motorbike before the race and began to think hard for solutions. The nearest fuel refilling station was five kilometres away. There were two options in front of the hare—either drag the bike to the fuel station or walk and get fuel from it to fill the fuel tank of the bike. Finally, the hare started dragging the bike. Soon, the hare's limbs began to ache since they were not used to physical activity, making it even harder to drag the bike.

After what seemed like an eternity, the sound of bicycle pedals could be heard. The hare turned around to look and, sure enough, it was the tortoise, merrily sauntering along. The tortoise saw the hare lugging his bike and understood what had happened.

“Want a ride to the refilling station?” the tortoise asked, smiling. Finally, the hare swallowed his pride and accepted the tortoise’s kind offer.

With the hare sitting on the pole of the bicycle, the tortoise causally remarked, “I told you my bicycle has infinite mileage. Someday, there will be no fossil fuel to run your vehicles but I will still be able to ride my bike.” The hare stooged a little, whether out of shame or to avoid the tortoise’s heavy, hot breathing, who is to say?