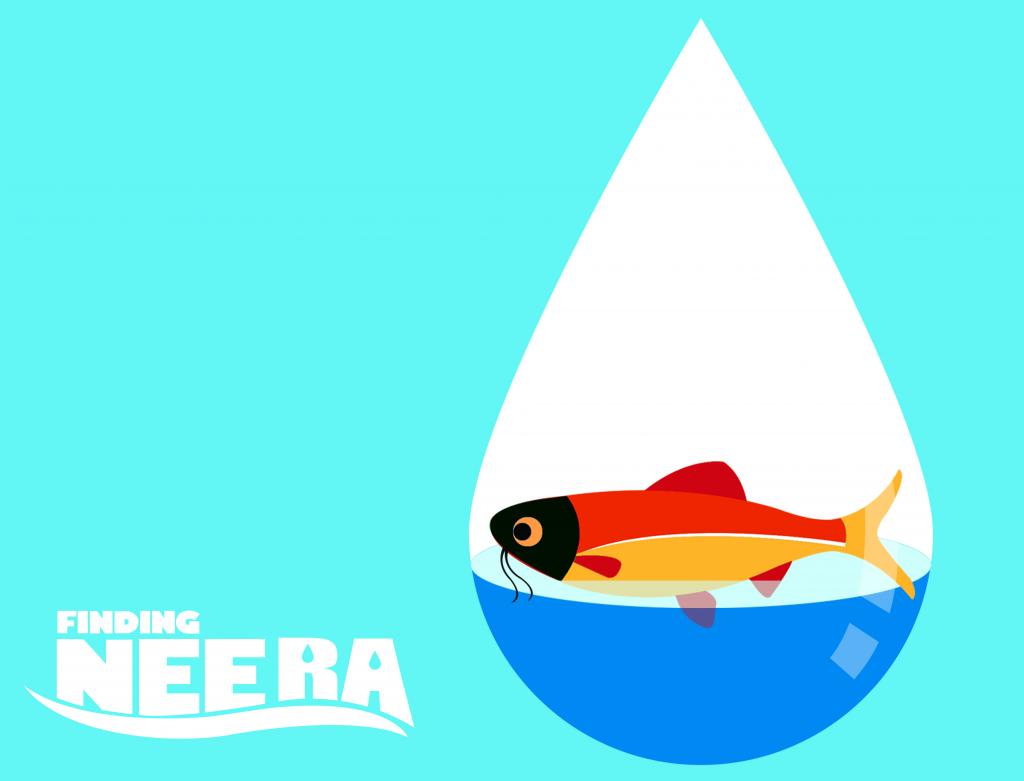 Koooooo. The whistle sounded like a wolf howling in the night. The brakes hissed and screeched as the train slowed down. Megha’s bed trembled, waking her up with a jolt. She stretched her hand to grab the bottle of water, but it was empty. She looked outside the window. The train had already left the station and rustic maroon pillars were passing her by in a swift motion. They were crossing a bridge over a river. She pressed her nose against the glass window. It was a full moon night and yet there was no reflection of the moon on the river. There was hardly any water in it, just puddles of mud water scattered over the dry riverbed.

Megha carefully climbed down from her berth and walked towards the pantry. This was another jolt – there were heaps of empty plastic bottles. She climbed back to her berth, but the thirst wouldn’t let her fall asleep. She began looking into her backpack in the hope of some reprieve. It had just a few drops left. As she turned it upside down, she started counting as if they were her last breaths.

First. Second. Megha stared at the third drop. She didn’t want to waste even a drop since she was parched.

In a blink of an eye, the last drop spilled. But that wasn’t it! It did not land on the floor but was hanging in the air. Megha couldn’t believe her eyes. She slowly saw a girl appear inside the drop of water. It wasn’t possible. She extended her hand towards Megha and the moment she held her hand, they were both transported to a different place. 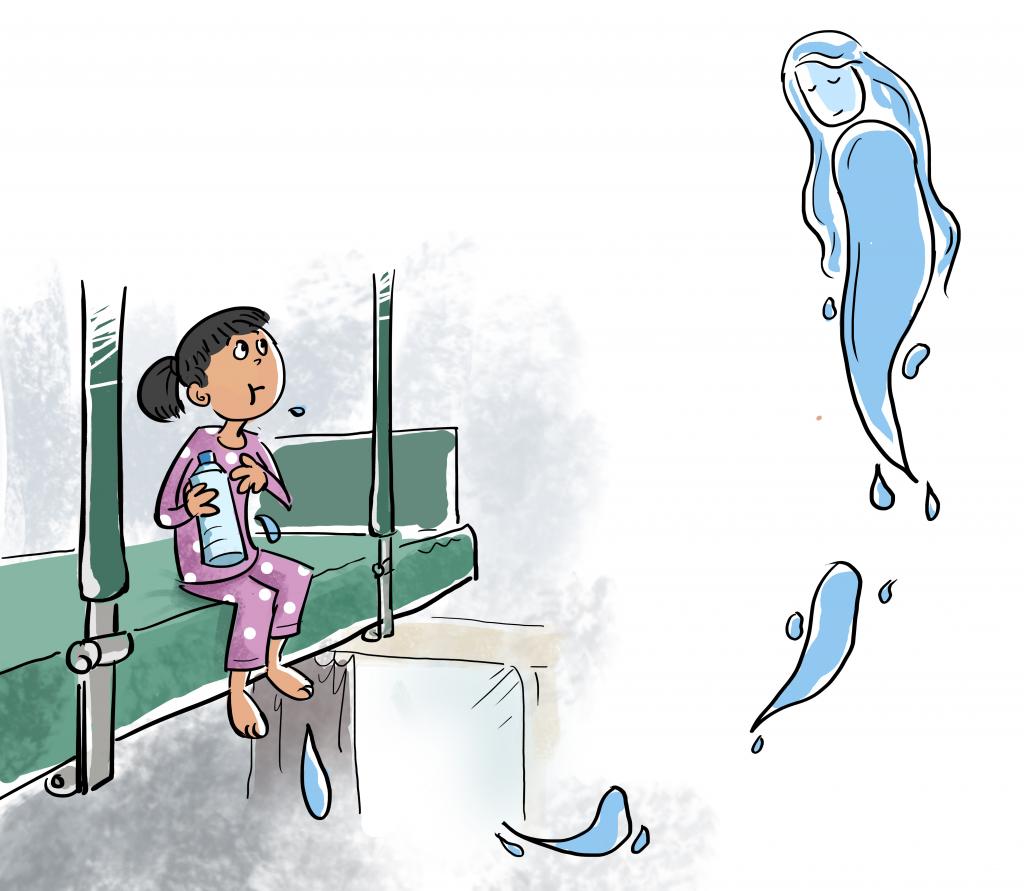 Megha initially thought she was surrounded by a transparent space, but she realised it was an enclosed plastic space.

“Who are you?” Megha asked the girl.

“Where do you live?”

“That depends on you.”

Appalled by this answer, Megha asked for an explanation. “I used to be free. People would catch up with each other as they filled their pots. Children grew up swimming in the rivers, where today they are guarded by fences and not allowed to use the water. Today, I am a cause of sadness and worries. People are fighting and dying over me,” said the little droplet. Amazed, Megha listened and her silence gave the girl an opportunity to fill in.

“I have been on earth since the beginning of time. I came from distant galaxies. When my journey began, I climbed down big mountains and hills, crossed many waterfalls. I gave life to every living organism but soon things started changed rapidly.”

“This was long before you were born. Would you like to go on an adventure and know my story?” asked Neera.

Meera smiled ear-to-ear, “I would love to!”

“Did you know there is a word for water in every language on earth?” as Neera started talking, Megha realised they were on the top of a hill.

“Every drop of water on Earth is a more than a billion-year-old. Almost 70 per cent of the Earth’s surface comprises of water and 97 per cent of that water is in the oceans. But only 3 per cent of that water is freshwater or sweet water, of which 70 per cent resides in the glaciers. Come let me show you!” said Neera. With a whishing sound, they both went off to the glaciers. As far as Megha’s eyes could see, everything was white. Megha muttered as she rubbed her hands, “It is so cold here. But Neera, if most of the water is in the oceans and in the glaciers, where does the water we use come from?”

“We only use a miniscule amount of water from the earth’s surface as a vast part of usable water is underground. About 0.3 per cent of fresh water is found in the surface water of lakes, rivers, and swamps,” added Neera. Megha’s eyes widened. “If we have only 0.3 per cent water, how are we using it for so many years!” asked Megha.

“This is because of the water cycle, in which water from the lakes and oceans return to the clouds through evaporation and when too much water gets collected, it bursts down on Earth as rain. But this cycle has been tampered with. Due to climate change, some places have faced cloudbursts and unseasonal rainfall, while others are facing recurring droughts,” said Neera.

“What happens when it doesn’t rain?” asked Megha. Neera showed her neem and sheesham trees adorning a riverbank they were at. They looked dry and weak. Megha had been to this place as it was her grandmother’s village. “It has not rained for a year here. People have started digging deeper to draw water from wells and handpumps, without knowing the consequences,” said Neera.

But Megha was surprised. How could digging deeper could have ill-effects when all of us used underground water for daily use? To which Neera retorted, “When the upper-level of water gets depleted, we draw water from further down. There are heavy metals, like arsenic, in groundwater and as we dig deeper,
the metals percolate the water which we use. This affects our health and can prove fatal as well. Animals drinking this water also face health hazards, and the consequences are manifold. Farmers lose their cattle and their produce is also affected as they go back to manual farming which takes more time and labour.

“Imagine if you have to drink a glass of milk full of metals and chemicals!” said Neera.

Megha gulped at that thought. She had forgotten her thirst but still had an uneasy feeling in her throat. Neera continued, “When water became a commodity, I lost my freedom. More importantly, it put a financial burden on those who couldn’t afford to buy it. Today, water companies sell drinking water and advertise it being rich in minerals and full of vitamins. Big corporates such as soda companies have been buying rivers for industrial purpose and farmers have no water to irrigate their fields. As the rivers dry up, animals also start wandering and enter villages in search of water, with a threat of getting trapped or killed.

”In times of severe scarcity, our priorities are wrong. Water is being used for entertainment. A water park, for instance, uses up to 100 million litres of water everyday, which can meet the daily needs of nearly four lakh people. People living in slum areas right outside these water parks drink filthy water. When Maharashtra was facing a drought last year, almost 60 lakh litres of water was used to maintain the cricket pitches during the Indian Premier League,” said Neera.

“The condition is so severe that scientists are trying to find water on other planets when water bodies on their own planet are neglected.”

Although a fundamental element for life, I am an outsider on my own planet. I came on Earth to give life, but today, when in one place I am trapped in bottles and sold for money, in another place, farmers are ending their lives due to extreme drought.” Hearing this, Megha felt a choking feeling. 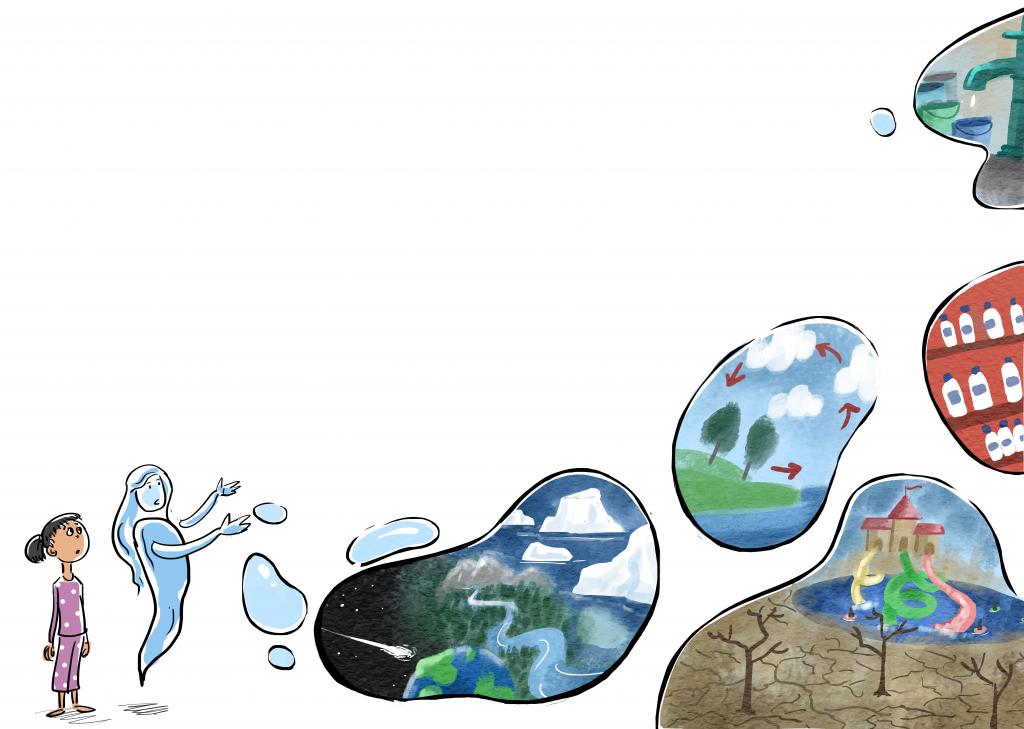 She wondered whether she could contribute to mitigate the water crisis. Neera saw the concern in Megha’s eyes and asked her if she wanted to drink the water from the river. As Megha started walking towards the riverbank, suddenly her leg slipped and she started sliding down. Her heart raced and with a thud she banged her feet on her bed. She woke up feeling confused. She looked around her and found everyone still sleeping.

Megha looked at the empty plastic bottle next to her and thought of her new friend she had made. Though she did not have answers to all the concerns Neera had raised, she knew one thing for sure.

“I know what my summer project will be about!”

Megha opened her notebook and started writing the things she had just learnt. In the semi dark railway compartment, Megha managed to write on the top of the page: