Anatomy of a Solar Panel 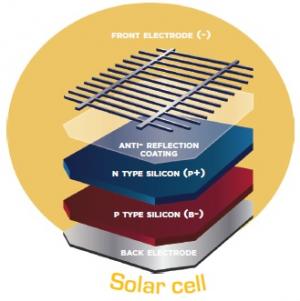 Energy sourced from the sun to generate electricity is called solar energy. This is done with the help of solar panels, each of which is lined up with either 60 or 72 photovoltaic (pv) cells that convert sunlight into electrical energy. The process by which this takes place, called the photoelectric effect, was discovered in 1839 by Edmund Bequerel, a French physicist, who found that certain materials would produce small amounts of electric current when exposed to light.

The Silicon wafer is made of up several individual cells, which can be seen in the form of little squares. These when exposed to sunlight, displace loose electrons from the atom, generating a flow of electricity. A single pv cell is capable of generating 4-4.5 watts of power, while an entire module can produce up to 320 watts of power, as of 2018.

Tempered glass is placed on top of the cells since a transparent layer helps trap more light.

At the rear end, there lies a back sheet that is usually coated in white so that there is no loss of energy through heat radiation.

The electricity generated from this solar panel is made to pass through an inverter first, and then distributed to different points for running the appliances at home and elsewhere. This is important because the electrcity generated from the solar panel is DC and it needs to be converted into AC current. Secondly, a solar panel produces low voltage, which generates less power or electricity. Hence, for increasing the voltage to 220-440 volts, we would need a battery.

In case, the energy produced by the solar panel exceeds usage, this surplus energy flows into the main power grid and can be drawn later from the grid itself.

However, we can also store this energy by installing a battery, thereby, ensuring a ready source of electricity whenever it is needed. 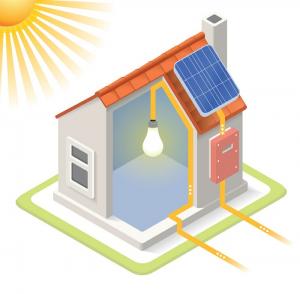