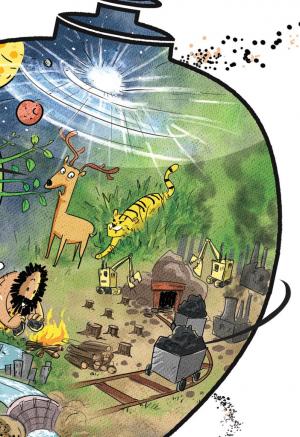 It was getting dark. Soon there was a big moon over the sky.

I wonder how the earth and the moon get the energy to keep rotating, causing days and nights and different seasons. Don’t they get tired?” asked Piu.

“In ancient Greece it was believed that if a stone is rolled, it stops after sometime because it gets tired,” said Pom.

“You must be joking, everyone knows that it’s because of friction. But how do the moon and earth keep spinning on their axis?” asked Piu.

“Almost five billion years ago, our solar system had its beginnings as a vast cloud of dust and gas. The cloud began to collapse, flattening into a giant disc that rotated faster and faster. The swirling, spinning disc clumped together to produce planets, moons, asteroids and comets, and the energy to spin and rotate,” said Pom.

“You mean our earth, moon, planets and asteroids start spinning from the giant disc, the way a spinning top get its energy from thread,” asked Piu.

“Exactly, Piu. When our solar system formed, planets borrowed some of that early spin and that’s how the story began, the story of energy. This energy to spin along with the heat of the sun makes our atmosphere, our weather patterns and our planet friendly to life,” said Pom.

“Energy due to the spinning of the earth is kinetic energy and the energy from the sun is heat energy. Am I right?” asked Piu.

“Absolutely. And the most interesting aspect is that energy can change its forms. For example, ocean water absorbs the heat of the sun and rises up in the air to form clouds. The water vapour in the clouds cools down by releasing heat energy and falls down as rain. The water releases energy and turns into snow and ice on the polar icecaps and so on. This never-ending cycle of transformation of energy eventually forms the ideal environment for life to evolve,” Pom said.

“You mean life, like you and me,” Piu asked.

"But with the origin of life, the story of the changing face of energy got a new twist. Unlike inanimate objects, these new occupants, living organisms, started transforming heat energy into the chemical energy, otherwise known as food, to sustain themselves. But this magical power was restricted to green plants only. And then something started that was so far unknown to the planet,” said Pom.

“The transferring of chemical energy from one living being to other, also known as the food chain,”said Pom.

“I don’t understand. Can you explain?” asked Piu.

“Plants, with the help of sunlight, transform minerals and water into chemical energy, like glucose, starch and cellulose, to name a few, as their food. When a herbivore, like a deer, eats a plant, energy transfers to the deer. When the deer is eaten by a carnivore, like a lion, the energy accumulated in the form of the flesh transfers to the lion. When the plant, deer and the lion die, the energy accumulated in them is consumed by microbes and transferred again to the nature as minerals,” Pom said.

“It’s a complete cycle! In other words, every one of us living on the planet has one thing in common. We carry a common thread called the thread of energy. How interesting!” Piu said.

“The story of energy took another twist. Some 50,000 years ago, the first humans discovered controlled combustion when they discovered fire. From then on the story of energy took a turn. The human appetite for energy grew by leaps and bounds. Unlike the fellow inhabitants of the planet who need energy just for their survival, human life needs energy for every activity from transport and agriculture to building homes and destroying cities. Practically everything,” Pom said.

“You can’t end such an interesting story like this . . . What happened to you, Pom? There are tears in your eyes! Are you all right?” Piu asked.

“The story of energy for need really ends here, Piu. The next stage is the story of energy for greed. Because of this greed, human are destroying forests, hollowing out the very body of our Mother Earth in search of coal, strangulating rivers, and spewing poisonous gases and radioactive smoke into the atmosphere. Human lust for energy is gradually making the earth an inhospitable place,” Pom said, softly.

“What is the way out? What about renewable sources of energy?” Piu asked.

“Renewable sources are good alternative but that’s not all. Human should realise that this planet belongs to some billions and billions of species and not just for them. The resources on the planet are finite that’s why we should use them frugally,” Pom said.