Why Do We Eat What We Eat?

Kuku jumps from her bed the moment the doorbell rings. Today is her birthday and she is excitedly waiting to meet her friends in the evening. She opens the door and sees a delivery man carrying a big backpack. He smiles at Kuku and hands her a package. Kuku looks at it and screams, “Ma! Nanaji’s gift has arrived!”

She thanks him and closes the door and runs back to her room. “Ma, I will be in my room.” Kuku opens the package and finds an old rustic book inside. She opens the book and sees her grandfather’s familiar handwriting. “Happy Birthday my dear, Kuku. With this book, I am sending you lots of love and some magic on your birthday.”

Kuku smiles and runs her hands over the words. Her grandfather is her best friend. She settles in her bed and begins to read…

"Long ago, humanity took a giant leap with the discovery of fire. It changed how human beings lived. Although, we did not discover fire in the usual sense, humans discovered the technique to make fire and control it.

With this, humans started to disassociate themselves from the rest of the animal kingdom as they were doing something that was different. They would now eat cooked food. Food was softer to chew, easier to digest, and with it began the art of cooking. It also led to the creation of utensils to store and cook food.

When our ancestors mastered the art of cooking, they became discerning about what and how to eat. This led them to select plants and their parts which were edible. These were cultivated further and this selection of only a particular varieties of plants marked the beginning of agriculture. Soon, our ancestors started differentiating between crops and weed. But that was not an easy task. It took thousands of years of trial and error to point out a particular plant as a crop. The evolution of cereals from wild grass is just one example. This whole process was like the domestication of plants, much like the domestication of animals.

Since climatic and other conditions such as, soil type, had a prominent impact on the whole process, one couldn’t produce tropical plants of the southern hemisphere in the northern hemisphere and vice-versa. This gave us our distinct food habits. 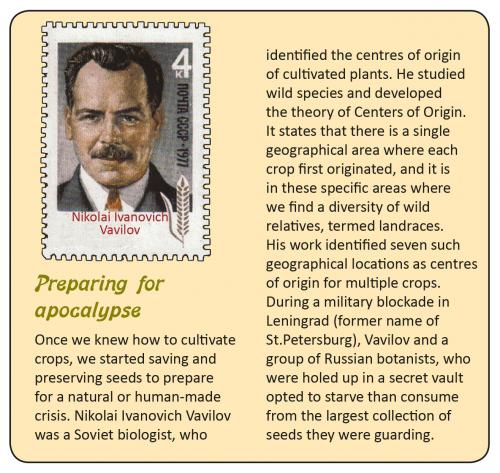 Climate change too had a direct impact on food production, which triggered humans to migrate. While migrating, humans took with them domesticated animals. This affected their food habits as well. Humans were forced to incorporate new local foods into their diets and had to let go of some of their old food habits."

Kuku looked up from her book. She was amazed at the new things she was learning about. Kuku was very happy to read this book. It was indeed full of love and magic, but she had to get ready for her birthday party. However, Kuku didn’t feel like letting go of the book and thought reading another chapter wouldn’t hurt. With this, she turned the pages to find out more…

"The second major impetus in human civilisation came with the advent of trade. Our ancestors realised that they did not have to change their place of residence according to the availability or non-availability of a particular food. They realised that anything from a food item to a daily-essential could be traded. Common salt was one of those items.

Probably the only mineral we use in our food, salt can’t be grown on trees. Fruits and vegetables taste sweet, bitter, sour but none are naturally salty. That’s why we depend solely on the natural availability of salt to enhance the taste of our food and to meet the requirements of our body. It is said that salt trade goes back to some 6,000 BC. Salt was so precious that it was not only used in food, but was also used as a currency.

The history of trade of food and other items in the Indian peninsula goes back to the Indus Valley Civilisation. The trade system did not only develop the concept of market, currency, and the system of economy, but also developed the system of taxation and the concept of state and empire. The need for trade eventually led to the discovery of trade routes. Later, this led to the 'discovery' of the New World. But the word 'discovery' is misleading as the Europeans who coined the term had just discovered a new route, the sea route, to reach the countries of Asia, Africa and Latin America.

With the discovery of a new country, people came to know about new food items. In the Indian context, spices were one such discovery. For Europeans, spices were simply magic herbs because they didn’t have any substantial nutritional value, but enhanced the taste and the aroma of the food. These herbs and spices along with other produce such as, muslin and cotton, made the Indian subcontinent immensely rich. The opportunity to become wealthy and also the access to spices made European traders want to come to India more often. Fierce battles were fought amongst the Dutch, English, Spanish and Portuguese traders to get a hold over the trade of Indian products.

Today, food habits are global and so is the way we buy vegetables and cook. In the course of civilization, humans have rediscovered and reinterpreted the very notion of food. Today, unlike a basic need of life, food is associated with class. A section of affluent people in our society prefer to buy imported foods even though it does not have any substantial added benefit. Ironically, foods that originated in our country are today valued more in foreign countries. Turmeric originated in India but today it is trending across menus abroad in shakes and smoothies.

With burgers, noodles, momos, rice and many other items adorning our dinner table, our food has made us global citizens in a true sense. 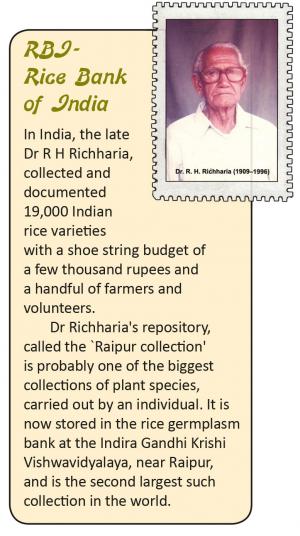 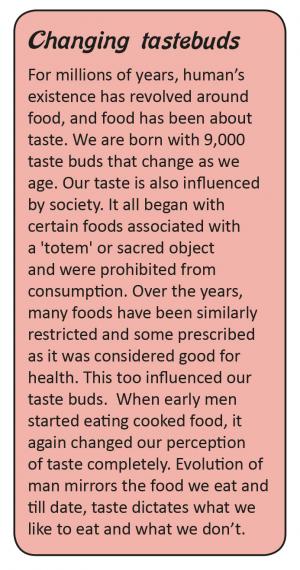 However, being one of the most essential things of life, food was vulnerable to abuse throughout history. It was effectively used as a weapon by creating famines. India witnessed recurrent famines under the British rule. Not just our foreign rulers, but even a section of our own society used food to oppress others. The restrictions on Hindu widows to eat non-vegetarian food or the recent attack on meat-eaters are some of the examples. As seen in the Dandi March, food also played an important role in our freedom movement..."

Kuku paused for a while. She wanted to read more but too much time had passed and she was running late for her party. She picked up the phone to call her grandfather and thanked him for the wonderful gift. Kuku got ready for her birthday party and joined her parents in the kitchen. Her father was lining up the glasses and filling them with fresh juice.

Her mother was stirring the kheer over the gas stove while her sister was taking out hamburgers on a plate and placing it on the table. Kuku looked at all the food items laid out on the table for the party. It was the first time it struck her that these delicacies came from different places.

Kuku had never seen her plate of food the way she did today. She laughed as she picked up a donut her mother made with khoya. “Aah! Another fusion food melting in my mouth! It’s delicious, Ma!” exclaimed Kuku. She couldn’t wait to write back to her grandfather about her own little discoveries about the food in her kitchen.