With her hair neatly oiled and braided, wearing her green-and-white school uniform, Selvi sat on the mat waiting for Amma to get her favourite tiffin of idlis and carrot sambar.

But today, as she waited she couldn’t smell the usual aroma from the kitchen. 'Here you go, Selvi, finish your tiffin and go to school!' Amma placed a plate with idlis and coconut chutney. 'Before you ask me, let me tell you, no carrot sambar for the whole of this month. Carrots have become very expensive these days dear. I’ll make you pumpkin or radish sambar ... you’ll start liking that too.' Amma said with a big smile.

As she walked to school, Selvi’s thoughts were on how she was going to survive a whole month without her favourite carrot sambar! Engrossed, she walked on the narrow lanes which were lined with small grocery shops, hair-cut saloons and tea shops. The street dogs were lazing around and the cows and buffaloes were basking in the early morning sun. Similar sights and sounds added their original flavour to this small town where Selvi lived.

Suddenly, that familiar stench emanating from the close-by vacant land disturbed Selvi’s line of thought. 'Ohh!' frowning and holding her nose with her fingers, Selvi quickly rushed from that place. This was a no man’s land which had become everybody’s dumping ground. Everybody threw their waste over there. Nobody knew how it all started, but it has continued. Occasionally, the corporation guys cleaned the place, but the dumping continued and it didn't matter to anybody whatsoever.

Selvi sat on her bench with a long face, with the thoughts of her favourite vegetable still bothering her! That’s when Vani Mam’s voice shook her awake. ’Selvi, explain the life cycle of a butterfly. This is the third time I am asking you, you seem to be lost!’ The school bell a lot of times can be a saviour! Trinnnnnng!! The kids ran out. Just when the ten-year-old was about to leave, Vani Mam, stopped her. 'Selvi, are you okay, what is bothering you?’ Selvi shared her huge challenge, her big problem of no carrots for a month because they couldn’t afford them. Vani Mam listened patiently and simply walked away when Selvi had finished.

Next day, at school, Selvi’s friend, Muthu, came running to her. ’Here, Vani Mam, asked me to give this to you.’ He shoved a small newspaper pottalam (packet) into her hand and ran away. It had ‘carrot seeds’ written on them. ‘Ah! I can grow my own carrots! That’s a good idea! Thank you Vani Mam,' exclaimed Selvi. ‘But wait, where do I sow these?’ Now, that was Selvi’s next problem. ‘I don’t have flowerpots nor any space in front of my house, psst...where do I sow them?’ On her way back to school, she went around looking for places to sow her precious carrot seeds. ‘No, not here, there’s too much sun here. No, not there...this is far away from my house,' she kept saying. Not a single place was convincing enough. It was getting dark; Amma would be waiting for her. And Selvi was also very tired. She looked around. The only place she could find was the narrow patch of soil in that vacant land which had become a stinking dumping ground for garbage. Holding her nose with her fingers, she quickly went there, sowed her carrot seeds and ran back home. ‘Ugh! I should wash my hands! I hope those seeds grow!' she thought.

Ramesh Uncle who lived in that lane was watching all of this from his window. ‘I think that little Selvi is hiding something precious there. Let me go and check.' Twirling his moustache, he rushed to the spot. When nobody was watching, he dug to see what Selvi had hidden! Lo and behold! He found tiny, brown seeds. ‘Awww... Selvi was just trying to grow plants and I spoilt it!’ Apologetically, he once again dug holes and put the seeds in them. In addition, the kind-hearted man also sowed some palak seeds!

Now, there was somebody who was watching all of this. Rukmini Aunty who lived on the other side of the land, thought, 'If that Ramesh can sow those tiny seeds...I am an expert at making Avakkai mango pickles and I have those big mango seeds left with me, let me sow them. They will grow into huge trees! Bigger and better!' Now this was becoming quite a competition! 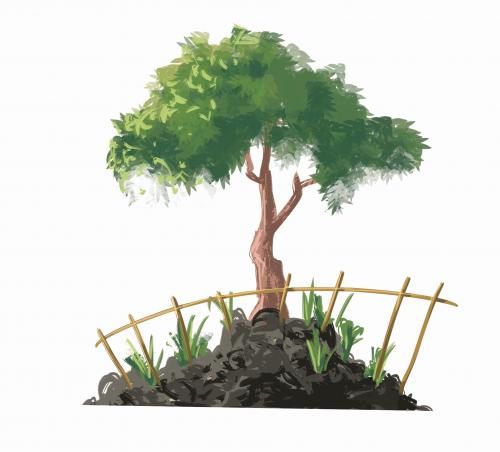 The next few days, there were gentle showers, Mother Nature was also playing her role in the drama that was slowly unfolding. Tiny, bright green leaves grew here and there. The seeds had begun to sprout! The sight brought insurmountable joy, not just to Selvi, but also to Ramesh Uncle and Rukmini Aunty. As the plants started to grow, Selvi’s friends, Muthu, Vasanthi, Ezhil and Kalai also got excited. They also wanted to do their bit. ‘Okay, friends let’s clear all the plastic covers lying here and there. Let’s clean it up!' Muthu said. Kalai added, 'Let’s make a board which says, please throw your garbage in the dustbin, not here!’

Things didn’t stop there. The positive energy was contagious. It suddenly looked like everybody took notice of that land. Many others also planted saplings. Everybody, took turns to water all the plants. Selvi and her friends, with the help of adults, even managed to build a fence. Rukmini Aunty and Selvi’s Amma also gave a helping hand. The neighbours, who never smiled at each other, seemed to be greeting each other. There was warmth that had emerged as a result of the common cause everybody had started working for.

Selvi was ever so excited. It was the day when she was going to harvest her carrots. Ramesh Uncle was already waiting there to help her out. She knelt down with love and pulled out those carrots. Then she gently removed all the soil sticking onto the carrots.

At home, Amma made Selvi’s favourite carrot sambar. Selvi and Amma made sure that they shared the carrot sambar with their neighbours. Not just them, everybody else too, shared what they grew in the garden, their community-garden.

Frowns had become smiles. A garbage patch had become a community garden. A community was reborn for common-unity. Thanks to Vani Mam’s carrot seeds in that newspaper pottalam.

She is a Bengaluru-based performance storyteller who shares her tales through her storytelling venture, Storipur.