It was a Sunday, therefore, a holiday and for that reason a day for some fun and exciting activity. Hence, Babbi was quickly getting ready to receive her friend Neenu and go play in the nearby park. Neenu’s mom would also come along as she was close friends with Babbi’s mom and the two of them often planned many engagements for their kids.

Babbi's mom promised them an ‘experience’ in the park this time. Skeptical, rather than keen, about such ‘experiences,’ Babbi related it to being fed some strange and so-called healthy foods again. However, this time, when they are visiting a mundane colony park, what could there be to feed upon, let alone it being healthy!?

When the four of them entered the park, their moms explained the game to them. Simple as it was, Babbi’s mom instructed, “Go around the park and find any five things you can eat.”

“Yes, there are things you can consume here,” she retorted patiently, even before Babbi could air her views about the futility of searching anything among the grasses and trees. “We found over ten things that we could eat here yesterday so if you are a bit observant, you’ll win the game!”

As a precautionary note, Neenu's mother added, “Don’t eat the thing you find immediately. Show it to us; we’ll see if it edible or not; then we’ll wash it for you; and only after that you can put it in your mouth.”

Neenu held Babbi's hand and claimed, “Let's get done with this fast and then play peacefully.” As these little detectives set upon a discovery of surprises, their mothers leisurely strolled behind as casual invigilators.

The duo brisked quickly, stopping often to observe the trees and bushes around. A few steps ahead, a pleasant aroma filled the air. The ground was covered with a purple fruit, squashed by the feet of morning walkers. “Jamun!” Babbi exclaimed, when Neenu picked a fruit intact. Both the girls collected them in their bag and rejoiced upon their first finding. Though, Neenu realized that if they could chance upon the first one so quickly, then perhaps the claims of their mothers were valid. They gave each other a pained look and proceeded to find the second item. 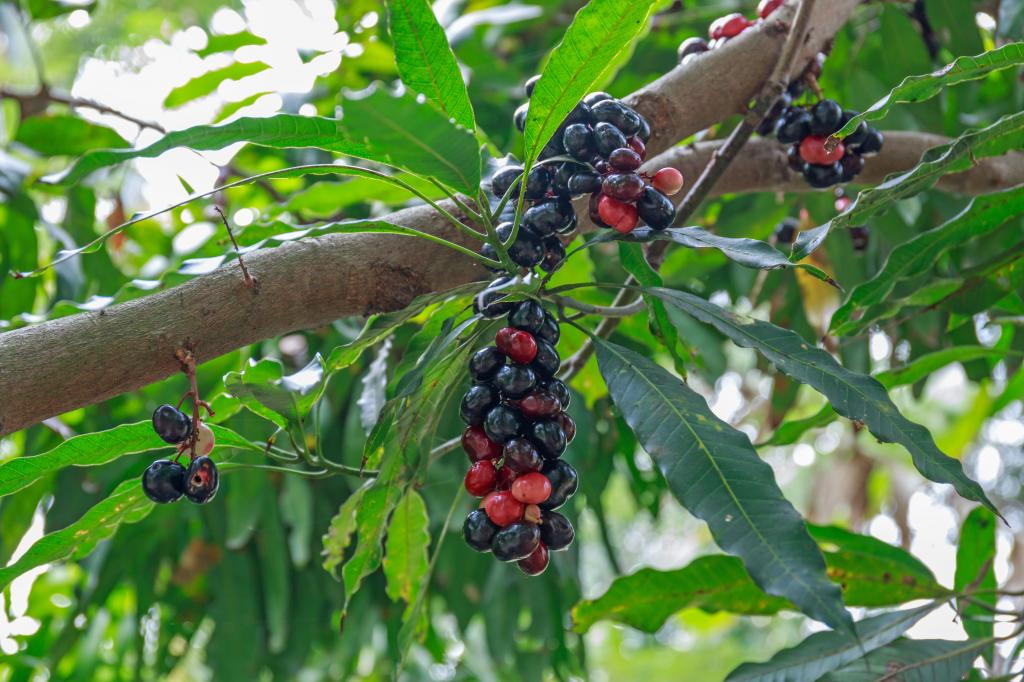 This was easier, the gardener, had planted a couple of banana trees around his room, where he stored his gardening toolkit and equipment. A bunch of baby bananas hung from them but were quite high and unapproachable for the kids. Plus, they did not want to risk plucking them since the gardener was around so, they pointed at them and appealed their mothers to consider their recent finding. Their mothers nodded gladly.

Just then, they spied a lady surreptitiously breaking a stem off a small tree. Neenu jumped to pluck its few leaves. Inhaling their divine fragrance, Babbi recalled how her mom adds them to her upma recipe. When they showed this to their mothers, Neenu’s mom patted their heads and said, “This is karipatta or meetha neem as some call it and yes, it is used for cooking many dishes.”

Approaching closer to their target, the little girls sprinted to look for the last two secrets. By now, they were willing to believe that food is indeed available at all the places and all the seasons.

Babbi spot a curious tree with a bunch of many round fruits growing together. Both the children clambered on a bench to pick and study them closely. Neenu doubted, “Are they edible?” and looked towards their mothers for a clue. Babbi’s mom offered her some hints, “You had this yesterday at home.” Responding to Babbi’s blank face, since Babbi and Neenu thought hard about what it could be, Babbi’s mom revealed, “It is goolar! This fruit is similar to anjeer (fig) but not sweet. It is wild and used to make a tasty sabji (vegetable dish)…”

Thrilled with overcoming their fourth challenge, the couple surged towards its last hurdle. An old uncle plucked the leaves off a small plant and put them in his mouth before resuming his walk. Neenu and Babbi instantly recognized it and cried in unison, “Tulsi!” They both had it at their homes and are used for making tea very often.

With the jamun, banana, karipatta, goolar, and tulsi, the girls were thrilled to win the game! Just as they were running in circles with joy, their mothers congratulated them. Since the foraging-bug had bitten them already, the curious girls asked to disclose to them the five other food items that their mothers had found in the park the previous day. 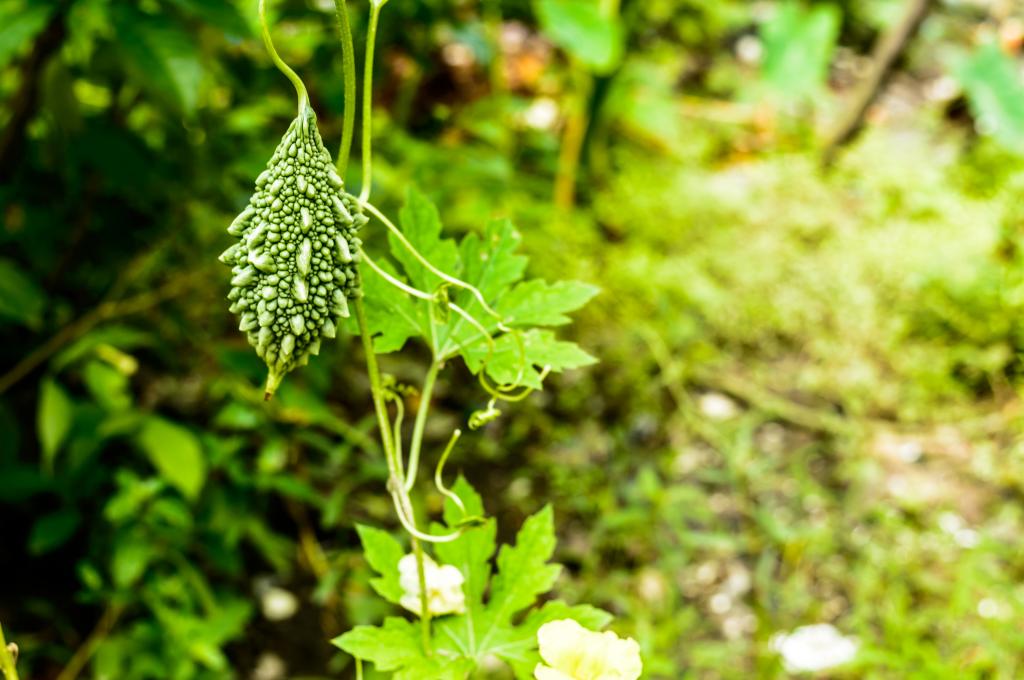 So, they keenly noted the karela, as their mothers pointed towards its vine. “How could you miss the mangoes?” Neenu’s mother exclaimed as this was their favourite fruit! Then Babbi’s mother helped them identify the karonda, a red-white fruit growing on a small bush. It is sour, has a sticky latex, and is used to prepare pickles. Neenu’s mom pointed at a tall papaya tree and asked the kids to notice its small, green fruits, which they squinted their eyes to see. And as they looked for their last and tenth fruit, their mothers reached the exit gate and pointed to the coconuts being sold outside. 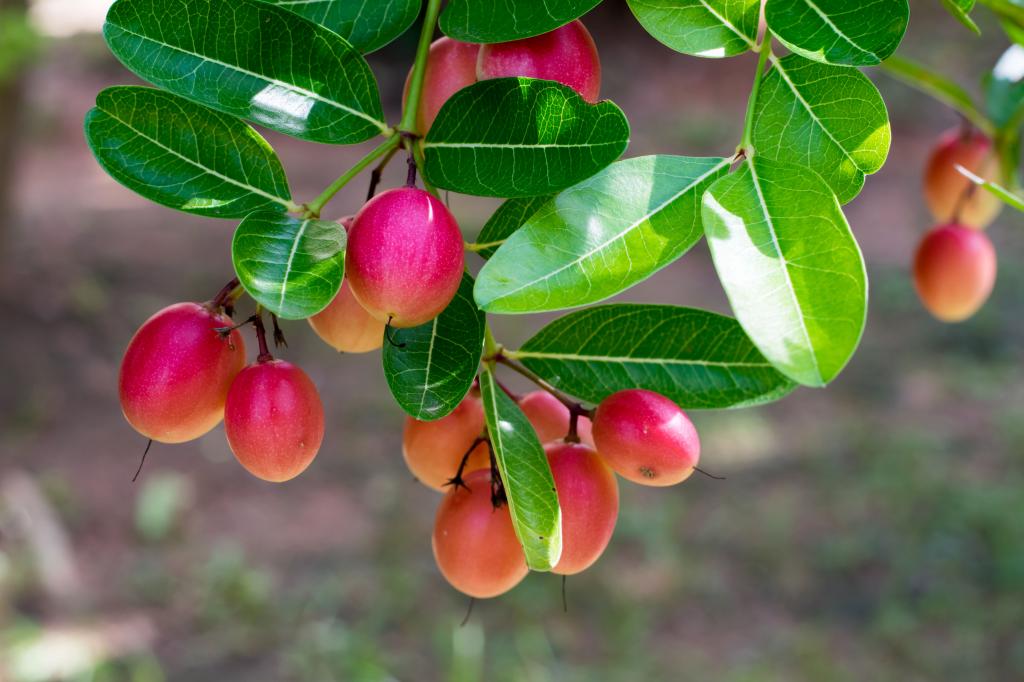 “Awh!” both Babbi and Neenu gave a disgusted look to their moms for including something that was not growing in the park. But the girls soon forgave them as they all sipped the refreshing coconut water and felt delighted with their fruitful ‘experience.’