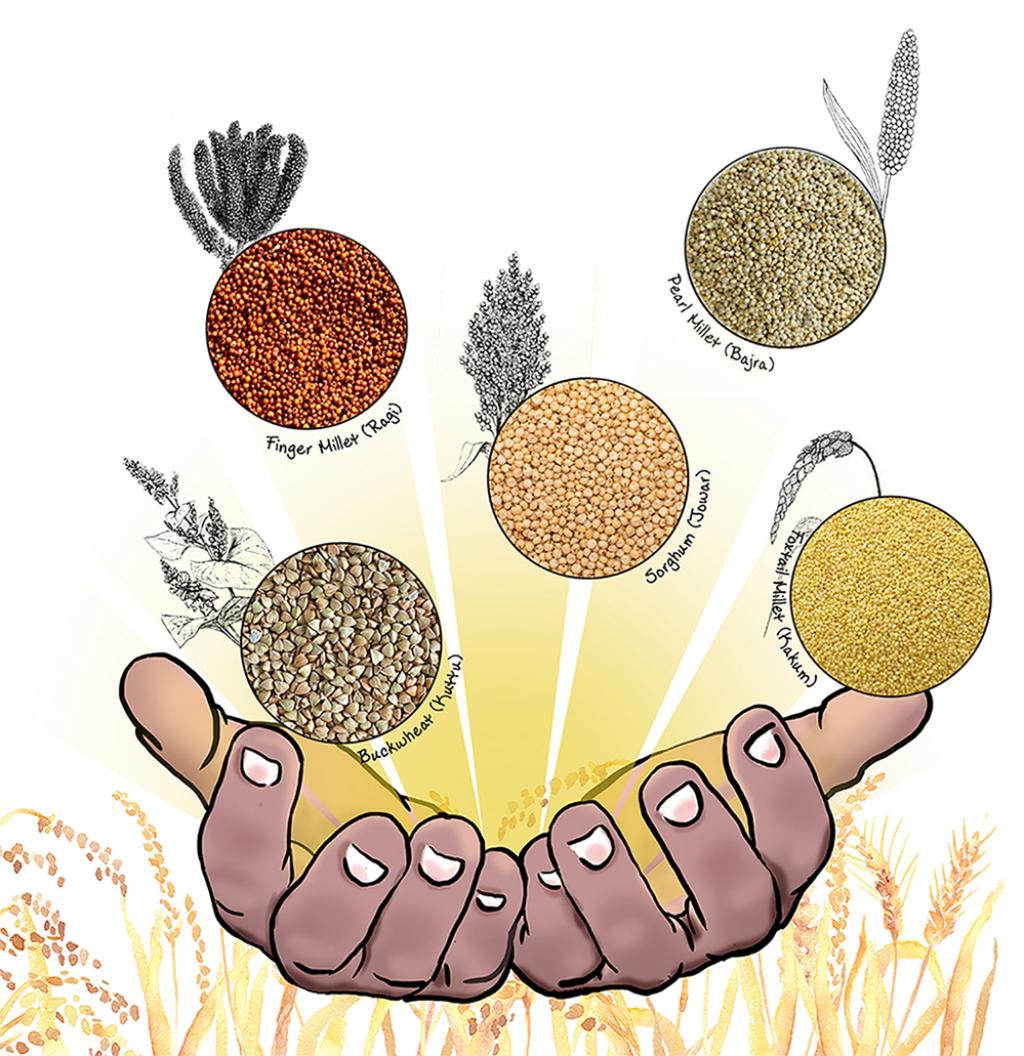 Hi friends! Have you ever reflected upon the usual grains that we eat every day? Apart from the most popular, wheat and rice, there are a lot of other cereals that we consume like sorghum (jowar), pearl millet (bajra), finger millet (ragi), and buckwheat (kuttu). Most of these are local foods and are prepared on special occasions like fasts or festivities.

In fact, there are several grains like these which are very important. Note: little millet (kutki/shavan), foxtail millet (kakum/ kangani), porso millet (chena), barnyard millet (sanwa), kodo millet (kodon), and amaranth (rajgira). (Psst! Their local names are exhaustive so just keep a track. Here, we’ve mentioned what they are called in Hindi). So, today, we’re going to talk about these group of grains called ‘millets’.

Well, millets are one of the oldest foods known to humankind. Their charred grains have been found from the Harappan sites and they are also mentioned in the Vedas—one of the oldest archaeological and literary sources of our subcontinent, respectively. An ancient grain, millets have been used both for our consumption and as animal feed.

Scientifically speaking, millets are a group of small-seeded cereal grains that belong to the family of grasses (Poaceae family). They are grown in many countries around the world and have a lot of diversity in species, colour, and appearance. Depending upon their size, they are broadly divided into two categories: major millets and minor millets. Major millets include sorghum, pearl millet, and finger millet. Minor millets include little millet, foxtail millet, proso millet, barnyard millet, and kodo millet. Botanists have counted two pseudo millets too namely, buckwheat and amaranth.

Millets are superfoods. They outshine wheat and rice in many aspects. They are high in both macro nutrients, like proteins and fats, and micro nutrients, like iron and calcium. They guard us against many vitamin and mineral deficiencies. They are rich in fibre, are gluten-free, and have a low glycaemic index (GI).

Don’t worry, GI is just a rating system for foods containing carbohydrates. It tells you how a food item affects your blood sugar level when you have it on its own. Low GI means low impact on your blood sugar, which is good. High GI means trouble. Your cold drinks, pizzas, and burgers have high GI, by the way! Therefore, they are bad for your health and millets, on the other hand, are a blessing. With a GI lower than wheat and rice, millets help us in tackling many health issues, like obesity and diabetes.

Further, my dear friends, millets are exceptional in some manner. Do you know that finger millets have over ten times the calcium content of wheat or rice, and barnyard has over five times the iron? Now, that's some info to show off, right? Look at the approx. nutrient content, given per 100 grams of the edible portion of a food crop, displayed in graphs given below and alongside. 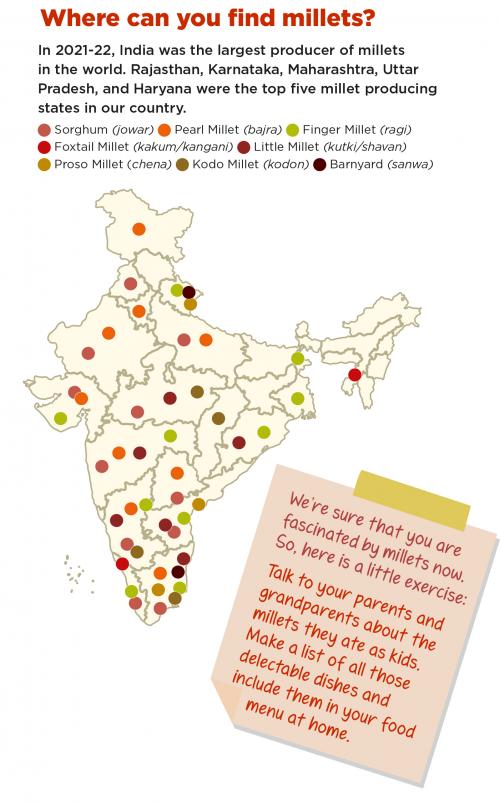 Owing to their small size and hardiness, millets are very climate-resilient. They can grow with less water and in harsh temperatures. For example, pearl millet can grow well in Rajasthan's heat. Minor millets provide enough yield even when the monsoons fail. Furthermore, millet farming does not need much chemical fertilizers and their crops hardly attract any pests! So, cultivating them is not only inexpensive but is also good for our environment. You see, when we use chemicals, we not only kill harmful pests but also kill friendly insects, like earthworms. Thus, millets are chemical-free and nutritious. Safe to grow, safe to eat. A perfect win-win food, right?

Now, you must be wondering that if millets are so healthy then why do we not find much of them around like wheat and rice. Well, that wasn’t the case always. Millets were quite common until a few decades ago, and in the tribal parts of our country, they still are. Post-Independence, our agricultural policy focused mainly on commercial crops, like wheat and rice, and neglected millets. You’ll be surprised to know that before the Green Revolution, millet production was about 40 percent of all cultivated grains, contributing much more than wheat and rice. However, since the Revolution, the production of rice has doubled and wheat has tripled. Over the time, as millets became less attractive for the urban and young consumers, they ended up becoming the ‘poor man's food.’

Today, millets are returning to our plates. They are available as cookies, bars, and snacks. But try avoiding these packaged foods as they have a lot of refined flour and sugar, which is not good for you. People lack awareness about the benefits of millets. Processing minor millets is also a bit complex and requires specific equipment. Many people have also forgotten how to cook them, though it is not all that difficult. You can soak them overnight and after rinsing and drying, use them as a substitute for rice in almost any rice-based dish. You can also make a porridge, roti, khichdi, or upma using them. When we visited Odisha last summer to understand our government’s millet programme, we tried many millet dishes like dosa and kheer, and they were yummy! If you have a sweet craving, then we guys can also tell you a recipe of millet laddus!

You’ll be proud to know that the year 2023 will be observed as the International Year of Millets following India's proposal to the Food and Agriculture Organization of the United Nations. While our government is promoting millets as nutria-cereals, many of our states have already begun promoting them. 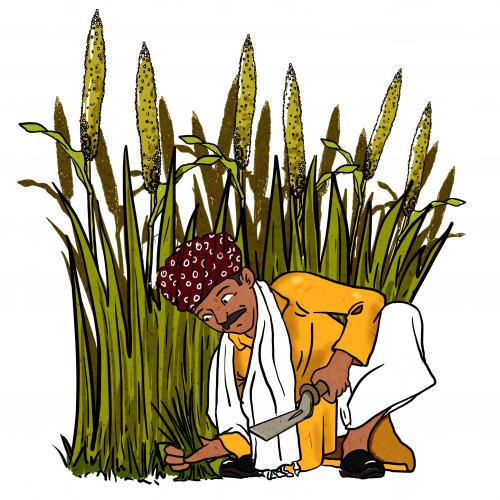 The Karnataka government is promoting millets as the future food. Maharashtra is valuing them for their resilient crops. A Farmer Producer Organisation in Telangana is exclusively pushing millets. Chhattisgarh’s Millet Mission aims to make the state as the millet hub of our country in the coming years.

Odisha is addressing its malnutrition through millets and has introduced a mascot called ‘Millet Girl, Milli’ to stir interest among children like you. Milli is sharp and fast because she loves millet-based dishes. Aren’t you now tempted to have a mouthful of millets too?

Well, our country has a huge burden of child malnutrition, and food diversity and millets can really help us in addressing this issue. At present, most of you kids survive on wheat and rice at home, and maize and soy among outside foods. So, it's important that you introduce some variety to your diet and eat a lot of fruits, vegetables, pulses, and multiple grains, especially millets. As our seniors say, ‘A colourful plate is a healthy plate!’